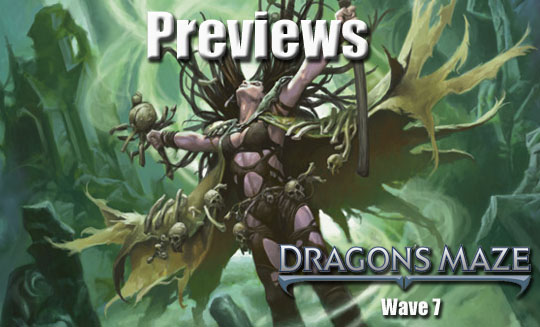 Awesome design in every respect

A nice way to debut Wave 7! This is great design through and through. Part casual/Commander and part asking desperately to see play in a more competitive format. I for one, believe many will try with mixed result. At worst, it’s a Golgari Phyrexian Arena. A card that continues to see play in tons of formats and is in my shortlist of cards to always trade for personally.

This beautiful enchantment has the ‘advantage’ of actually accomplishing something even if it gets Oblivion Ring‘ed. Ideally you want to fit it into a deck that gains value by milling itself. Obviously, I would try to fit it into that bad deck I listed a few months back. Don’t look, it’s hideous! The card feels mythic too, kind of like the ultimate Golgari spell (sorry Putrefy! and to that extent Pernicious Deed).

It also scream reanimator to some extent and it already is in the colors of most Standard reanimator lists. You would either reanimate on of your big dudes, draw another card that allows you to dreadge, another reanimator card or just …. 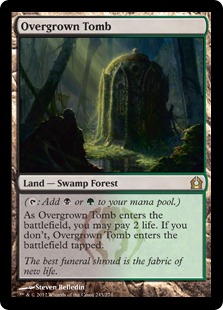 It could be worse.

I feel this can have a home in more of a junk Enchantress-style deck. It would be the ‘sort of’ Argothian Enchantress. The deck would not necessarily need to gain an advantage from the self-mill, but it would be nice. Once the rest of the set is spoiled, I will get to work on such a deck. I’m not promising it’ll work or anything, but there seems to be decent support for it and who knows? Maybe the create-a-card winner will become part of it.

Speaking of which, here is what I would have submitted:

Sacrifice a land: Draw a card

I think it’s feasible and it’s probably not something you’d do early on anyhow. Unless of course in Legacy/Modern or such where you might benefit from cards like Life from the Loam. I would have Photoshopped an image with the default black mtg card template or something, but that will have to be for another time. I would picture a Lich-like or Dark Paladin creature sifting some kind of precious substance from say a swamp. And he/she would have the usual bad guy-ish maniacal laugh going on. It would be a top down shot with his face as the focal point.

The ‘Need’ cycle would begin, we already have:

Thought it was just a videogame, did you?

Of course, one of the main problems Deadbridge Chant possesses is mana cost. I’m not sure you want to pack ramp cards just to get to play this and draw more cards. You kind of need to do something in between. This can’t be your end goal, it’s more of an enabler or ‘engine’. As such, it’s hard to justify the 6 mana you pour into it.

It’s preselling at about 7$ at the moment. For a mythic, that’s not too bad. If it finds a home in Standard, you can be sure this price will rise. However, I have a hard time seeing it fit in a current deck (even reanimator). Look for it to slowly drop as the Commander crowd nabs their singleton copies and the demand lowers.

I really hate it when in a day and age of making sure most creatures have more than one creature type, Vampires seem to get the short end of the stick. Clearly this thing is a Vampire ‘Cleric’ , but is Wizards of the Coast afraid to print it as such? Is is sacriligious? I’m not entirely sure.

A lot of you will simply look at this and think : “Bah! Commander card!”. I beg you to reconsider. It has probably the 2  best color protections this side of Standard and i usually out of burn range. 5 mana for a 4/4 body with all bonuses. Of course the ‘ultimate’ one being that it will one-shot your opponent if he is at 10 life or less. The conditions are not impossible to meet as you are probably always attacking with it and gaining life in the process. If your opponent is playing stricly Orzhov colors, he is somewhat limited in his solutions (Merciless Eviction, Liliana of the Veil, Terminus) to name a few.

He’s hot right now and will continue to be for a long long time. At around 10-12$, he is a good deal. I cannot see this going under 10$, it’s just that playable. 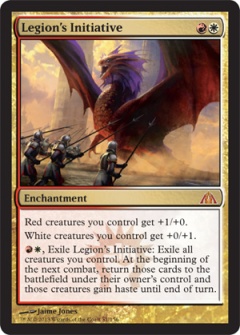 Legion’s Initiative is probably one of the most insane Honor of the Pure variants ever to see print. It was something that Boros decks probably needed to be able to properly compete as a speedy aggro deck. Now the Boros swarm has an answer to Supreme Verdict and Terminus! You get to blink out your creatures for the whole turn, that’s

It’s probably tied with 1-2 other cards as hottest card of the set so far. I mean, the second ability doesn’t have to be an anti-mass removal response. If your deck has a lot of  ‘enters the battlefield’ creatures, you just gained even more value. While a lot of the Boros cards are more Battalion- driven, we may yet see a need breed of Boros deck. You get to cast this on turn 4 and have the mana available to protect your little Boros dudes if your opponent goes Turn 4 Supreme Verdict. It’s miles ahead of something like Rootborn Defenses, but then again we are comparing a two color mythic to a white common. 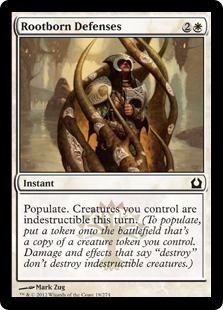 There’s some ‘fine’ print to this ability. Did you catch it? No?

‘Those creatures gain haste until end of turn’

Not too shabby! So this means we can get a huge one-shot Fervor out of it later in the game. How awesome is that? This card is pretty much always relevant. Of course, it requires a key element: creatures. We’re playing Boros, our deck is predominantly creatures. No worries there. We obviously need 4 of this beast of a card since we almost always want to draw it and we always want to draw at least 1 copy each game.

I’m probably going to run this in my Gisela Commander deck as well, since it obviously contains a lot of  ‘come into play’ cratures. It’s tutorable when I sacrifice my Academy Rector to something like Goblin Bombardment and then save my creatures for a Wrath of God effect. Of course there’s always Boros Charm, but in Commander most people probably have more mass removal than you have anti-mass removal. You can only abuse Sunforger and Mistveil Plains for so long. 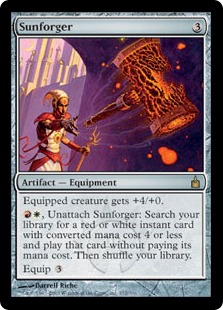 A small glimpse into the future will reveal that this card will maintain its sizeable price tag as it is :

B) a four of in all non-Commander decks running it

D) ALL of the above

Of course, the answer is D!

Look for it to maintain if not increase in value in the very near future. 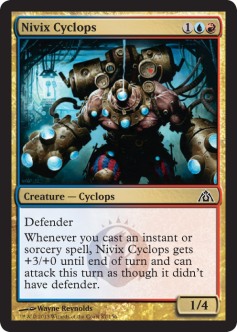 I just really love the art on this thing!

Let me just start by saying that I am a huge fan of Wayne Reynold’s art. He has drawn some pretty nice stuff. I first took notice when he did the original Ajani Vegeant.

That’s one p$%ed off Ajani!

I also like his Cunning Sparkmage art and had drawn a custom playmat of it a while back. 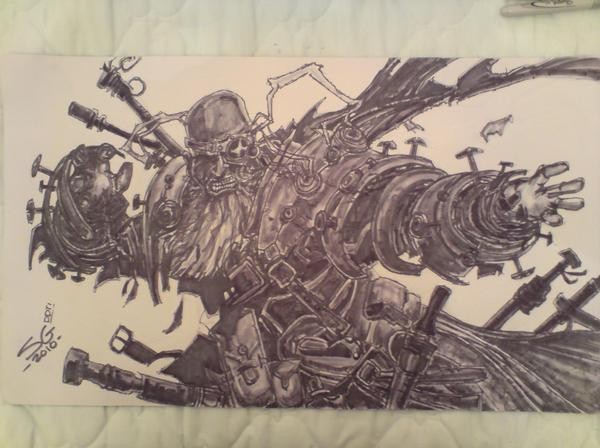 Don’t get much free time to draw these anymore

Back to our friendly Cyclops! Most people will compare him with Kiln Fiend.

Blast from the not too distant past

Nivix Cyclops is basically safer to most removal and gets to attack less. He is not destroyed by cards like Ultimate Price, Searing Spear or Pillar of Flame. He will probably be one of the more played commons of this set in constructed formats. Of course in something like Pauper, he is your Kiln Fiend # 5-8 (as most of those kinds of deck already play Izzet colors). You can also save up your Instants/Sorceries and just have him attack for 4 each turn. He also gets to properly block something the turn he comes down, which is a big big plus when trying to win damage races.

Tajic, Blade of the Legion

One mana army? Not quite

Boros is seemingly getting some nice Indestructability bonuses, almost as though they were made out of Darksteel. It’s a nice way to incorporate the whole amor/weapon aspect without necessarily always printing equipment.  Tajic will always be the one left standing, keeping the aggro going. He might otherwise also be your last bastion of defense versus other aggressive decks that pack more removal.

He is surely going to find a home in every Boros EDH/Commander deck ever. I know i’m going to include him in mine. He is the ideal equipment holder, always. Still wielding that Sunforger or Sword of Light and Shadow, while his fallen comrades look on from beyond the grave cheering him on so that he may possibly resurrect them.

I’m not entirely sure he will make the cut in standard since if you can realistically keep Batallion going, I would run Odric instead. Although I’m pretty sure that in a deck where you really want the little guys to keep piercing through defense, a 4 drop that ‘might’ help you is not ideal. I would much rather run Firemane Avenger, but even that suffers the ‘dies to flashed in Restoration Angel‘ death.

Tajic benefits from not being part of the Starter deck lineup, but will it be enough to keep his price slightly up? He’s currently 3-4$ and will probably settle a 3$ for the time being, until he ends up possibly being cut from Team Boros in Standard.

It’s a give and take relationship.

We get another split card, this time for the Simic Guild. So far I’ve enjoyed the split cards and this one is rather decent. Of course it works best with the evolve mechanic, but the Take half offers some fun interactions in many formats. I won’t enumerate them, as a quick search in Gatherer will reveal many many possibilities.

Each side costing 3 is fine, but probably not good enough to see competitve play. The card is obviously great in limited and should be a high enough pick if drafting those colors. The card as a whole can see play in a Bant Phantom-themed deck (circa. Judgment) if you’re looking for some random casual fun.

Well, it’s not really a specific time per se, but we’ll keep the updates going.