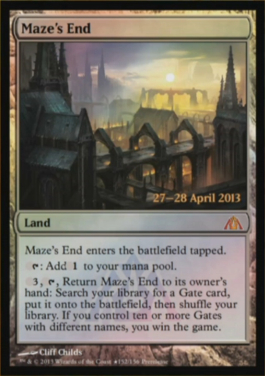 When they first announced the whole Dragon’s Maze random card replacing the basic land idea, people got excited. Of course for sealed deck purposes you would like a Guild gate or a dual land. They also mentioned one land would be mythic. It did not take people long to correctly guess that it would be something to do with Gates.

At first glance, it seems like a joke. However, those of us that have been around the Magic scene long enough know that given enough time even the most unlikely of win conditions can be achieved (Battle of Wits for starters). This one seems a heck of a lot easier to fulfill. We don’t know if there will be cards that get any land but there’s already this and Gatecreeper Vine which is a start.

It’s sure to be a hit in some casual decks as well, featuring Primeval Titan (banned in Commander). Since it’s the pre-release card, it should be super easy to trade for as well. I’m looking forward to reading decklist and articles featuring this card in the months to come.

Mark my words: this will be a deck!