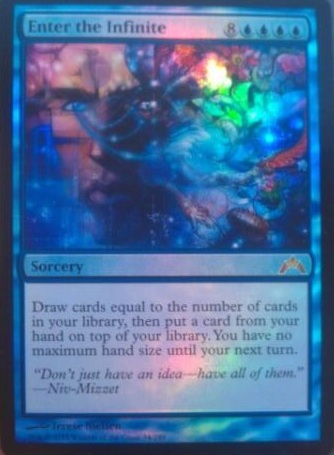 Is this a real card? Guess so, Omniscience was real afterall.

I remember a while back in a Q & A column at Wizards of the Coast where a reader asked how much would a spell cost that allowed one to draw their entire deck.

The answer then was something like: ” We would never print such as a card as it is rather degenerate and no fun”

A year or so later, we get this.

Obviously this is a combo card, probably one that involves a three card combo or something. Who Knows? You can pretty much do anything at the point, since you technically drew your whole deck and chose any card to put back on top. Obviously you wouldn’t want to lose on the following turn, by having nothing left to draw in your deck.

No maximum handsize, so you don’t even have to decide what to keep on that turn, nice nice.

A quick run through Gatherer produces a couple of card that can be of interest:

Yeah, that one was kind of obvious.

We’d still need a way to cheat it in or turbo accelerate like that Omni-Door deck.

Oh, how we can dream!

The card that relies on your opponent to have something specific in his graveyard. Now, while I have pulled this off in limited it’s not nearly as easy to do in a Constructed format. Most decks do tend to play at least a minimum of Instants/Sorceries so it’s always possible to get it to work. Then the other issue becomes being able to discard your big spells with some ‘Looting’ with cards like

It’s in the name!

Once this becomes Standard-legal, will you be the one to ….