No official art yet! Does anyone care?

A ‘blessing’ they changed the artwork

Nice to see they dug up this old fossil just in time. I think it can really be a contender …. in draft. 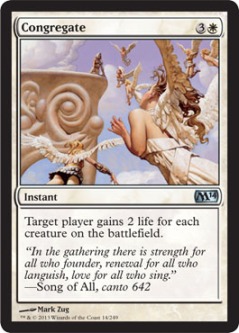 I want to hate on this card so bad, but I have such fond memories of playing it when I was a beginner. I guess it’s not terribly bad….

It can give you a lot more life versus a token or if you are playing a token deck. Then again, you’d probably prefer a mass boost or a mass removal depending on which side you are on.

Why bother making a variant of such an awesome card? Reprint it and make everyone happy!

It’s actually not THAT bad. Having played in the Time Spiral block limited format, I can vouch for this card’s effectiveness.

By all means, stop reprinting

Still not good on a planeswalker (since you sacrifice them when they go to Zero loyalty or under. Maybe we’ll see this in some ‘wacky’ enchantment deck.

They had to bring it back since it’s the ‘basic’ creature control card. I mean, whatever else would we do to deal with Thragtusk and the like? 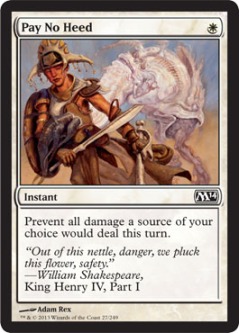 Yet another Bonfire hoser

A Sunspire Gatekeepers with no upside? Oh riiiight, the 4 toughness IS the upside.

For when you want everything to go bye bye!

They couldn’t reprint Cataclysm or something?

I suppose they still need to keep those planeswalkers under control.

Found in 1 out of 3 white based draft decks.

That should be Sin Collector being quoted there

For when you want to make it into a non-interactive affair. Seriously did they need to really reprint this thing? I don’t think it’s hard to pick up in the secondary market AND the modern deck that runs this card is pretty much dead.

I think Grand Abolisher would have been more appropriate and more appreciated as well. 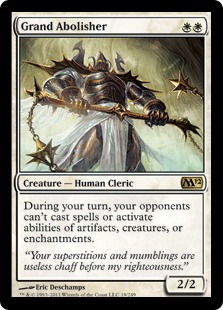 Try not to crash into Flying Men little hawk!

I enjoy vanilla once in a while too, but this is a little ridiculous no?

Ah! trusty wall made out of sword!

Nothing beat a good old Wall of Swords.

Except: how does it manage to just float in the air all on its own? Magic….oh yeah, ‘Magic’.

It’s like a Gravedigger for your instants and sorceries. If she can trade with an opposing creature on top of it, you will gain even more value out of her.

This card is by no means meant to be a real deal in constructed formats, but boy is it fun in limited! I look forward to once again drafting up a Red/Blue deck full of burn, bounce and utility dudes.

Archaeo comes from the Greek ‘ancient’

Now that you know this, you can sleep a little better.

It’s a crab in armor. How funny! We got it the first time Wizard of the Coast, no need for a repeat performance.

What? were you all expecting Counterspell ?

I think even something like ‘Deprive‘ would have been asking for too much? 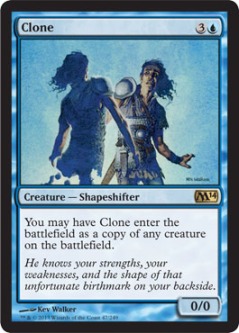 Will it be better or worse?

I suppose they really need to test out how well that new ‘Legend’ rule is going to work with the Theros block. No better way to do this than to reprint the original.

I guess you might need one – IF you plan on making an all-merfolk Commander deck.

Simple yet effective. It does sometimes see a semblance of competitive play. 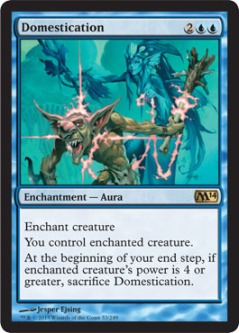 I feel really cheated that this thing is now a rare. What brought upon this change? It’s sure as hell not Control Magic, not by a longshot ( and even that card was an uncommon).

This and Negate – Core Set forever!

As a 1/1 for one blue mana, it has TWO more abilities than Coral Merfolk. How insane is that?

Good old reliable! I still like having no really good counterspells so as to force players to decide between this and Essence Scatter.

not to be mistaken for that archaic accounting software

A nice ‘Johnny‘ style of card. You can probably do some insane plays with it, plus it actually draws you a card so it’s not totally a dead draw when you’re out of gas.

Not really as good as Ophidian was now that the Constructed formats are more creature-heavy. 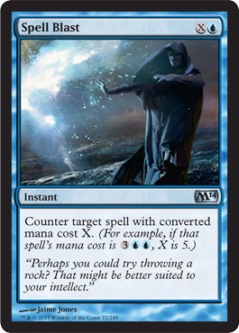 Another counterspell? I’m still not sure how I feel about this one, but I’m guessing that most of the time you’re simply overpaying to counter stuff.

Azorius Charm minus the combat restriction, but at sorcery speed and one mana more.

If only it somehow had a Relentless Rats clause…

Now back with a change in rarity!

Not only is this no longer that great of a mill card, but they have the audacity to bump this up to mythic ratity? Really?

This is like in all those ‘mill’ decks that never work. I would much rather play the other blue mythic in this set: Jace, Memory Adept

EDIT: So finally it’s still a Rare, I apologize for the misinformation.

Half an Aetherling, in cost only.

Its efficiency gets cut down by half, then half again and again.

It’s actually not that bad as you don’t have to waste your turn 4 to play something like Levitation. Now that was bad!

Getting rather tired at this moment, so I’ll be back with the rest of the cards tomorrow. Good night!