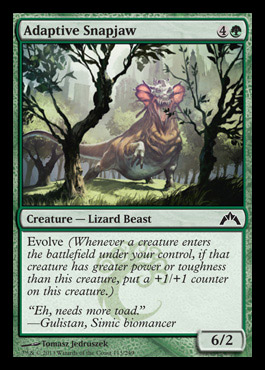 This card gives us a nice little peek at the possibilities of the ‘Evolve’ mechanic. While not being the greatest of commons, it does almost always Evolve your other Simic guild creatures. Its low toughness is actually great as it will also most likely evolve on the following turn when we cast a 3-toughness or greater creature. So basically it’s a 7/3+ for 5 mana that you have to wait a turn for. If you have played limited for some time, you surely realise that it’s a pretty good deal. It grows a creature and possibly keeps growing itself.

A great follow-up to Fathom Mage to be sure. Make Fathom Mage a 2/2 and draw a card off it. That’s probably going to be restricted to being a limited play, but who cares? Try it as an cheap casual deck for fun!