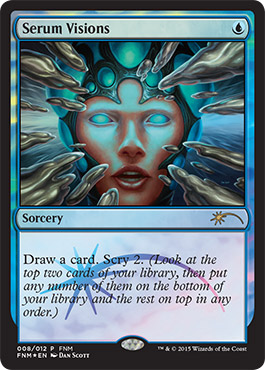 August’s FNM promo is a spicy pricey one ! With no Ponder, Brainstorm or Preordain in the format, Serum Visions becomes the premier cantrip/card selection card in blue. It’s played in almost every blue deck especially in Grixis Delver where it sets up your Delver of Secrets flips and fills up your graveyard to cast Gurmag Angler or Tasigur on the cheap. It allows you to keep a sketchy hand in a deck with a low land count since you get to dig 3 cards deep in order to hit that second land.

While the art is not as great as on the original card, I’m sure most players won’t care much. Being able to net one of these 12-15$ cards in a FNM (just as with Path to Exile the previous month) will most likely increase store attendance somewhat. The art is rather disturbing to some though, hinting at some rather inappropriate activity (for a Magic card at least). Run to your local gaming store and show off your drafting skills on Friday to become eligible in winning one of these.

Serum Visions was never a ‘big’ deal before. Originally printed in Fifth Dawn, this card was literally a throw-away common at the end of Mirrodin block drafts. Years later, every similar card gets banned in a new format and it slowly rises in value month by month until we have this inflated value. It was also an FNM promo a while back too and not many people cared about that one either. Now people are willing to trade Mythics, rares and also sorts of good things for it.Funny how things change, eh?