Well, close to half the set has been spoiled so far and how is it panning out? We get a few dragons and some ‘sort of staples’ returning as well as a really interesting mythic lineup. Speaking of Mythics, let’s get started on those first.

It doesn’t take a genius to figure out that this card is incredibly powerful. You get the token-making ability of Young Pyromancer with the ability to grow via Prowess. I think initially people didn’t notice that the tokens it makes have prowess as well. This allows you to do some pretty ridiculous things with it, since he basically provides you with a small army pretty often. I do like how Wizards of the Coast is encouraging people to play more non-creature spells with the Prowess mechanic right now. We used to have a Standard format with decklists of  upwards of 20 creatures and sometimes way to close to 30. It just seemed so wrong. Using removal spells for value is downright fun as is playing something like Raise the Alarm to get more bang for your buck.

So far, this is looking to be the card of the set.

The ‘other with mythic’ is just about as exciting as the more talked about one. You get your base white 2-drop with an ability (Lifelink, this time) as well as 2 more abilities and its perfectly easy to cast as well. The ‘Instant and Sorcery spells you control have lifelink’ part is downright sweet. Cast some burn spells to kill their creatures and gain some life for it. Not bad at all. Obviously there’s the pretty epic interaction with Blasphemous Act in Commander games. Those factors alone are probably enough for people to like this card, but… we have this last ability which pretty much equates to : value!

You get a pseudo-buyback or Snapcaster Mage-like ability for your spells.It seems to be actually better than Buyback since the card will go back to your hand as you cast it instead of having to wait for it to resolve (which is the case with Buyback). This can basically mean locking out a lot of creatures in Modern games for 5 mana : Lightning Bolt plus 4 mana, repeat. Oh and, Lightning Bolt basically becomes Lightning Helix. In all fairness, however, I’m not sure you’ll have all that free mana in a format that is pretty much about mana efficiency.

The last little tidbit about it is that Tiny Leader players will want to try it out as well. This fast-rising format is going to become a thing very soon, so I urge you to check it  out !

It’s always fun when they print ‘Power’ variants. This one, like Temporal Mastery will definitely try and be broken early on. Like Treasure Cruise, it has a nice little Delve ability, however triple blue will have the more dedicated blue decks trying to make proper use of it. As long as you’re paying somewhere in the neighborhood of 5 mana for it, it’s basically in Time Warp territory (which did see play in Standard).

You do end up exiling the card, like Temporal Mastery so as to prevent ‘abuse’. It also doesn’t give us a one mana discount the next time we cast  another copy of it (unlike Dig through Time). More dedicated control decks like UB Control might run a few copies, so as to potentitally get a ‘quicker’ kill with Pearl Lake Ancient. Also, is that Liliana on the card? It somewhat seems like it, then again … Maybe it’s a new Sultai khan? or maybe Liliana is set to make some kind of appearance later on.

This card is all kinds of weird. Casting it from your exile pile makes it similar to Misthollow Griffin. It seems like the D.D. creatures (Different Dimension) in the Yu-Gi-Oh! CCG. Will it be added to Legacy lists alongside Misthollow Griffin in the Food Chain lists? There’s a small possibility. It, like Misthollow Griffin is good exile fodder for longtime Legacy staple Force of Will. It sort of makes all your creatures unblockable, barring your opponent flashing in something like this

I don’t think it will be as good in Standard,even if it does allow you to ‘Delve’ it away and cast it later on. There is one small exception though: BU Control decks would maybe want a creature that sort of survives Perilous Vault and has pretty much the same stats as Prognostic Sphinx. It’s also pretty amusing to have it always come back white Relic of Progenitus‘s first ability if it’s in your graveyard. Also, unlike it’s ‘exiled brother in arms’ it’s not cast from exile – it’s simply put onto the battlefield.

I’m obviously a little saddened that this card is one mana away from being Tiny Leader material. I must brave on however, there’s a bit more ground to cover for today. The creature type is really nice – Orc. I mean there can never be enough, right? Just kidding, I obviously meant warrior. It might be the beginning of a little Mardu warriors deck uprising. Dust off those little Bloodsoaked Champions and start building! Maybe not! It’s actually a decent fit in something like Mardu tokens, allowing your tokens to deal some damage even if blocked by your opponent’s guys. Which brings us to ….

You can almost consider this guy a finisher in many ways. Make all their creatures block a lowly token and have all your other guys go in unblocked (obviously leeching a life per attacking creature to start off). It allows for nice little interactions if you were to have a deathtouch dude.

All in all, a nice little piece of cardboard for an overlooked color combination outside of Standard. 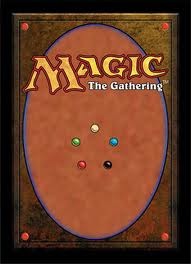 Each color seems to have 2 mythics to its name, so why does black only have one so far? Is Liliana going to show up or something? Maybe a multicolored black card will be mythic?

Shaman of the Great Hunt

“Weighing in at one red mana and three colorless, at 4 power, 2 toughness with Haste and a couple of good abilites!” Shaman of the Great Hunt! You can’t not like this card or at least appreciate it. Yes, it’s a mythic so it gets that little added touch of coolness to it. It has a decent chance of becoming a 5/3 on the very same turn too. In the same color combination, you could have cast Savage Knuckleblade the previous turn and then dropped this guy to make them into 5-power beasts for the attack step all while drawing 2 cards on turn 5.

This time we get another mythic Orc, a Shaman no less. Neither type is really relevant as of now in Standard though 😦

He’s a solid representation of the Temur color combination: Red for haste, Green for the ‘growth’/+1/+1 counters part and blue for the card-drawing. Shaman of the Great Hunt can sort of rebuild your army that might have died to End Hostilities or Perilous Vault the turn before, by drawing more cards which will hopefully be more threats to cast and by becoming bigger himself. The card draw ability is even sweeter in Commander games, where having a bunch of 4-power or greater creatures won’t necessarily mean the game is necessarily over.

Same as the second Black mythic. There is none so far. Perhaps a sweet new planeswalker that’s Red/Black?

Warden of the First Tree 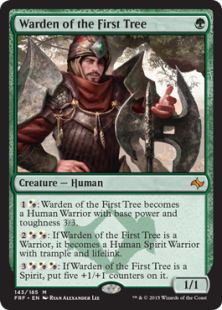 At first glance, we can’t help but compare this little guy to Figure of Destiny and rightfully so. He ‘levels up’ at instant speed as opposed to the levelers from Rise of Eldrazi. The big difference with Figure of Destiny is that this little guy can just continuously grow with his last ability. You just keep paying 6 mana once he’s a Spirit and go nuts! In older or more casual formats, you can simply change his creature type and start adding tokens from the get-go.

He’s pretty much an auto-include in Anafenza  Tiny Leader decks and very possibly in Abzan aggro builds in Standard. You just need some kind of way to track his current type other than dice I suppose, since one of his own abilities put counters on him and it may possibly lead to confusing board states. He’s also got that smug little grin that says : “Oh, that’s right!” He knows he’s pretty good and I believe that he will be.The card is just an insane mana sink and it can basically become an attacking Fleecemane Lion as of Turn 2.

I really like that the last mythic is a very odd one. You basically get a free 2/2 every time this guy survives at your end step. You then get some End Hostilities protection  as well (mind you, End Hostilities is nowhere near as played in Standard as Supreme Verdict was last year). Of course you really want to play as many creatures as possible if this guy’s in your deck. You get to unmorph them right before they die in order to Manifest more creatures if you activate Whisperwood Elemental’s ability. Is your ‘Manifested’ Elvish Mystic currently better as a 2/2 or do you want to unmorph him for more mana? It’s also neat with Legendary creatures, since you can technically have more than one in play provided it’s Manifested itself into play and decides to only unmorph once its doppelganger is no more.

Despite all the cuteness, he’s basically a decent-sized bodies that makes more creatures over time and potentially a decent b. Not sure if it’s going to be the next Master of the Wild Hunt, but I do know that it’s going to be fun trying to make a deck with it. It’s a card that can appeal to both the casual and competitive players.

We’ll have a brief overview of more Fate Reforged cards later this week.