Well, it’s that time of year again. The last day of 2014. Time to churn out one more little deck before we say goodbye and welcome what will hopefully be a great year for Magic: the Gathering and the world in general. This cool little decklist is from a tournament that happened in Japan not too long ago. I instantly fell in love with the list since it features so many cards one would never have thought playable in the Modern format.

You’ll quickly notice that just like the past Modern article I posted, the deck is not that expensive. A lot of people have the bad habit of assuming that Modern decks need to be expensive to win. Well, they don’t. Also, once you get your Modern manabase of fetchlands and shocklands (Return to Ravnica block)  – you’re set. Khans of Tarkir even made it easier on the wallet, giving us allied colored fetchlands (originally in Onslaught). The one card that is a tad on the pricey side is Auriok Champion – that is, until it gets reprinted (probably in Modern masters 2.0).

Resistant to most removal and lifegain!

The deck reminds me of an old Norin the Wary EDH/Commander deck that used him as a commander with Genesis Chamber to get a great deal of tokens in play. In this deck, you also get an insane amount of tokens with Norin /Chamber in play (not infinite though). The lifegain provided by the Soul Sisters (Soul Warden/Soul’s Attendant) mitigates the damage more or less from our opponent making tokens. All we really need to do is either attack or play spell so that Norin the Wary leaves play and re-enters the battlefield at en of turn (netting use life and tokens most of the time). Norin is actually hard to deal with most of the time and can do even more damage with Purphoros in play (as he usually does in the Commander version). Getting a free Shock to the opponent’s head by not doing much each turns is slightly unfair. Then again, that’s the whole point of jamming our favorite Red God in the deck. 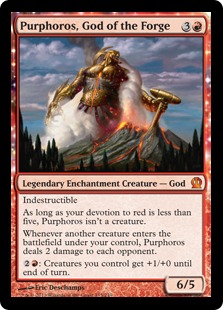 Ranger of Eos is such a great lil’ tutor in the deck. Go get a Norin and Soul Warden to start doing the whole lifegain/damage/tokens thing. Another cool thing about the Soul Sisters is that they pretty much nullify the Splinter Twin/ Deceive Exarch Combo and 2 in play will cancel out the Splinter Twin/Pestermite version. I do agree with the exclusion of Serra Ascendant in the build. he was just a glorified beatdown creature, something Ajani’s Pridemate is as well (with a better possibility of getting bigger).

Another ‘upgrade’ is Return to the Ranks over Proclamation of Rebirth (from Soul Sisters fame). It’s not strictly better, but when we’re not playing a deck with Martyr of Sands … The convoke part can pretty much make it cost nothing or next to nothing. Champion of the Parish can get pretty huge all of a sudden as well. Humans being the predominant creature type in the deck also allows us to go crazy with Cavern of Souls x 4. You can later on maybe name Soldiers or something if you already have one on Humans.

get your Myr tokens ready!

The great thing about the two color Boros color combo is that you get some great hate cards in the format. Cards like Rest in Peace, Blood Moon and Stony Silence can shut down quite a few decks in Modern. Blood Moon is especially nice in a deck that doesn’t actually need more than 1-2 Plains in play to function (everything else will be producing red, which is our main color). So, sleeve up this up, bring some tokens, extra dice for counters and prepare to pad your life total!

It’s almost 2015! What are you doing reading this? Go out and have a great time. There’s always time for Magic: the Gathering, later!