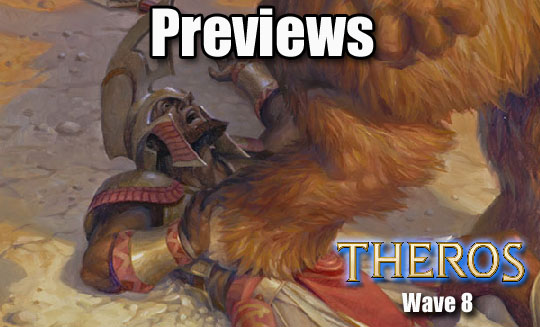 Let’s get down to it with a card that’s going to see a lot, and I mean a LOT of play everywhere:

Is this for real?

It looks like Muder and Dreadbore got together and…well, you know. You get the flexibility of Dreadbore at the speed and mana cost of Murder. If the monocolored planeswalker removal surprises you, you needn’t think back too far back to Zendikar:

On top of doin silly things with Dark Depths, it sometimes even killed the almighty Jace, the Mind Sculptor

As you can see, it is not so unreasonable for this card to exist. What does this mean for Dreadbore? Well, it means that if your deck is still a Red/Black aggro deck that is tight on mana – you might not make the switch from Dreadbore to Hero’s Downfall. If you are a monoblack or slower Jund deck, you should probably consider adding this card somewhere in your 75. I’m not going to jump ahead and suggest you put this in all your black-based decks  just yet. We haven’t seen the whole set, plus there’s always Pithing Needle if planeswalkers ruin your day.

I expect this will be very sought after around Pre-release time and I’m not sure if it’s going to maintain its original hyped value or not. Most cards usually don’t, but there are quite a few that live up to the hype. Your best bet is to get your playset first and then focus on trading the extras for whatever else you really need to complete sets/decks.

Reaper of the Wilds

Gorgons are back too!

At first glance, this card is a quality piece of cardboard. Then you start to wonder what you can fit this into and things start to fall apart. It’s got quite a few of the same problems as Blood Baron of Vizkopa. In a vacuum,  the card seems legit. Good abilities, cost and size. The mana costs are not too restrictive and the dollar value seems fair. That’s just it though: the card is just fair. It doesn’t straight up win you the game or at least turn the tide that much (like a Sphinx’s Revelation, Thragtusk, Olivia Voldaren, etc). Granted the aforementioned cards are a little hard to top, but this card doesn’t even seem to come close.

It has 3 abilities, isn’t it like a Golgari Morphling?

Actually, that title belongs to Deathrite Shaman. 3 very relevant abilities all at a very cheap cost. Reaper of the Wilds doesn’t  compare. It ‘dodges’ removal if you keep 1G up. How often is that going to happen in a Standard game? Not too often, at least not as of turn 5. Also, casting the card on turn 4, without acceleration means that you are basically casting a 4/5 for 4 mana more or less vanilla creature. Keeping one black mana up is fine if your opponent cast a bigger dude and you can hope to trade. With a lot of the Gods being indestructible, deattouch seems less powerful. The second ability still allows you to not walk into an Azorius Charm, Detention Sphere etc. Its Scry ability might be the best one overall, allowing you to trade in your dead creatures (and your opponent’s) for some free peeks at your topdeck.

Its body is just big enough for it to have survived a ‘Mutilate for 4′, if Mutilate were reprinted or didn’t rotate from Standard. 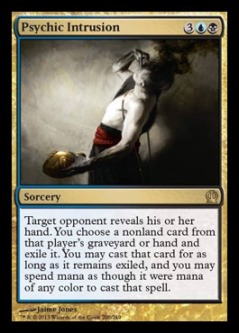 Not as situational as you’d think

This card is very particular: you get the usual ‘Cranial Extration/ Appetite for Brains‘ effect of exiling the card in their hand. However, you get to cast the card but need to pay the mana cost. This is much better than you think. You see: if you take a Sphinx’s Revelation and were able to cast it without paying its mana cost – X would be 0. By forcing you to pay the mana cost, Psychic Intrusion becomes less cute and more potent. It’s not limited to Sphinx’s Revelation’s X cost either. Last time I checked Rakdos’s Return was still a viable card.

All that being said, it still probably belongs in most Dimir-based decks sideboards. Exile an Atherling and save it for much later so you can win the game with it. Or get rid of a juicy counterspell and use it on a late game threat when it counts. Your opponent knows its coming, sure, but what can they do to stop it? Counter the spell? that’s pretty much about it. It’s not like they can do much to a card that’s been exiled, so you will probably always get to at least cast the card (because you can use your mana as any color mana to cast the card).

It’s going to be a fringe card, but one that is potent in commander as well. Since as with Daxos, I’m pretty sure it bypasses the whole color-identity clause when you produce mana. 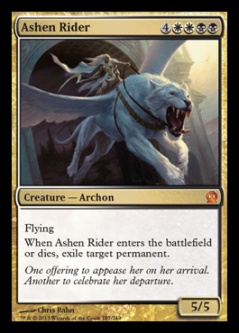 I believe we’ve seen something similar to this before… 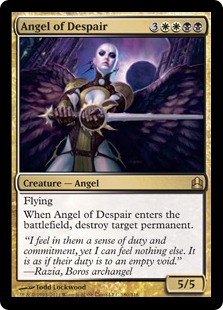 It doesn’t really take a genius to notice that Ashen Rider is going to be bonkers is some kind of reanimator deck. What’s more is that you get value out of either end of a card like Rescue from the Underworld. Ready your Scavenging Oozes because you’ll probably need them.

If you’re a fan of Commander, you now have your Angel of Despair # 2. More nice black/white destruction cards to join your army (which probably also contains Merciless Eviction).  The Archon creature type is a pretty odd one that they haven’t given the tribal treatment yet and I doubt that will come anytime soon, still never say never,eh? On another random note, it pretty much helps you fullfill half the devotion requirement on either both Erebos or Heliod.

Is this the Rancor you’re looking for?

We now get a nice replacement for our Wolfir Avenger or Rancor. While you can’t compare directly to either, there are similarities.

The obvious trade-off on Wolfir Avenger is 1 more power instead of the ability to regenerate. Worth it? Too early to tell, but probably not, unless you are basically using it as ‘removal’. I’m also not sure how relevant the Satyr creature type will be in the set.

As for the comparison to Rancor, it was basically because you get some value either way and it’s one of the ‘lower’ Bestow costs so far. It can trigger Heroic in a ‘Flash’ . It’s low-risk as Rancor was, even versus decks packing quite a few removal cards. It can also allow you to animate Nylea out of nowhere, thus gaining two surprise blockers (something you can’t do with a ‘surprise’ Advent of the Wurm). The card is also a Rare as opposed to Rancor and Wolfir Avenger‘s Uncommon rarity, so it’s probably going to be worth a considerable amount as well if it ever gets popular.

Not quite Medusa, but close enough. You can get a veritable Supreme Verdict once Monstrous or at least something comparable to Mageta the Lion‘s ability. Feel free to just add it to that Gorgon deck you’ve been waiting to bust out. I know I’ve dreamed of the day since I read Masked Gorgon. I couldn’t help but noticing that they were getting increasingly more powerful as the years went by. You can even have a Gorgon General, you get to choose:

Blocking/attacking? We’re in Commander here, those words are stictly for ‘flavor’

How to have Avatar of Woe in your commander zone

You can also just play all 4 of these lovely ladies in a BUG Gorgon-based Commander deck. Might as well try to be different and go for a more flavourful approach when playing a casual format. In Standard, who knows? She might be your deck’s ‘End Boss’ in the very late game, allowing you to kill numerous opposing creatures and offing your opponent in a couple of fell swoops. I wouldn’t bet on it though.

Glorious Anthem with a nice bonus

We’ll close out today’s Wave with this little gem. It’s a strict upgrade to Glorious Anthem aside from the fact that you can’t really stack them since it’s a Legendary card. The activated ability on it is a nice bit of removal, destroying creatures that ping your life total on top of those that simply deal you combat damage. Unfortunately, this still does nothing versus Deathrite Shaman (it’s just too good to keep down).

This card might usher in another era of White Weenie or Boros aggro decks, either of which we’ve seen a lot of lately. Sure, there’s always the odd guy playing the WW/r Craig Wescoe deck from Worlds. That’s still something we don’t see often these days. It’s poised to make some kind of comeback with the Heroic abilities as well as the Boros guild’s Battalion mechanic.

Fear the Spear! (Unless you’re a God, of course).

You guessed it! More Previews to come tomorrow. Leave some comment and come back tomorrow for more.

See something you like this Preview Wave? Go ahead and Pre-order it!