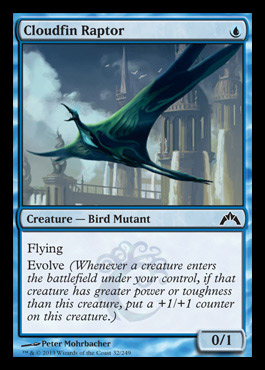 Having a bad ‘Birds’ flashback!

If there is one ‘Evolve’ creature that is expected to see Constructed play, this is it. It gets dropped on turn 1 and continues to deliver the beatdown as long as you can curve out. Dropping a second one on turn 2 followed by a 1 power creature like Delver of Secrets (for example) can be big. Next turn, flip Delver, play a 2 power guy and attack for 7 in the air!

I know it sounds a little sketchy, but trust me. You will see this across from you in a Standard event. Maybe even something like Red/Blue Weenie burn. Who knows?

Just like a Sweepstakes: many will enter, few will win.