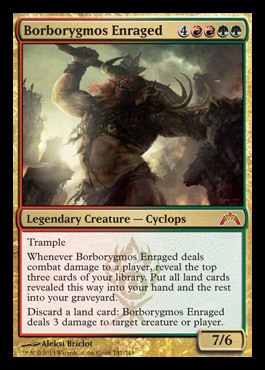 Back and better than before

Another costly rendition of the Gruul Guild leader. 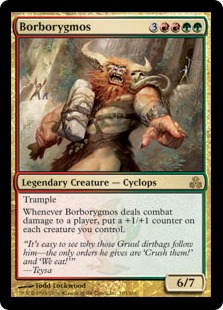 This one is a Seismic Assault on legs with a +1 damage on the activations.

As if this wasn’t enough, he can potentially feed his own ability each time he deals combat damage. Much like Seismic Assault in older formats, games will not last long if you manage to find Life from the Loam and proceed to cast it over and over(works best with cycling lands).

Obviously, he fits into the whole ramp sub-theme/mechanic of the Gruul guild. He gives added benefits to drawing those late game lands (something akin to landfall from Zendikar block). He provides a rather huge body at 7/6 but I would almost always like to see those statistics reversed. A seven on the butt is huge in Standard.

He might seem to be the least desirable of the Gatecrash guild leaders, but don’t count him out just yet!  He will probably be easy to trade for unless a big ramp style deck surfaces early on and increases his demand. Hopefully he will not go the way of poor Isperia who seems to be beyond neglected at the time being.