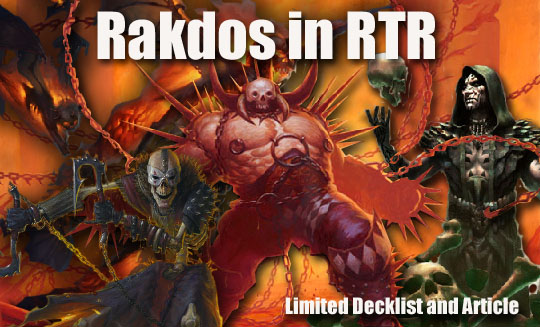 Chase Culpon emailed me back to inform me that there was an early Draft today and that he’d be there to test Standard and get a draft in around 2:00pm. Others on the Email list for the store chimed in. I was hankering for a little standard myself, just having finished most of my American Control Deck, but I really wanted to practice limited. Philly is a couple weeks away and I’m terrible at Draft right now. On the bright side I’ve been opening the money rares the whole time, so I guess life could be worse.

I arrived at the store near to 2 pm on the dot. Chase greeted me with his Standard deck and some Dunkin Donuts. This guy is all class! After losing terribly to his Human deck in Standard (I still need to tweak this thing), a bunch more people show up and we get this show on the road.

I’ll never get why everyone complains about the number of people in a pod exactly. I mean I understand that 8 is what you want and how cards table and that sort of thing. I also believe that 99% of the people complaining about this sort of stuff are looking for reasons to loose. 2 man draft, 8 man draft, 18 man draft I do not care. Let’s crack packs and build decks! Li Xu sits at my right, and says something I definitely took away from the draft: “Pick two colors and make a deck. A bad two color deck is better than a mediocre 3 color deck.” Sounds good to me! I’m so sick of getting mana and color screwed so I’ll listen to anyone that gives me advice on how to not have that happen.

Pack one pick 1: Chaos Imps… I decided that this is a pretty nice rare for draft… and not much else. I then decided to draft red for the rest of the pack. With hope for solid black or blue cards  as well.

I was extremely happy with the number of Unleashed “undercosted” creatures and a few neat bombs as well as the Deathrite Shaman for that extra reach and value. You’ll notice I picked up an Overgrown Tomb (thanks Li). I used it in the deck for the Shaman in case I could get a little value from it, but I knew mostly he’d be dealing in pain over pleasure. That said, I’m very light on removal and was not totally comfortable with that.

I won the die roll to PLAY.

Chase was living high from the beatings he gave me earlier from Standard testing.

Chase 7, He plays a Kordoza Monitor

It was much of the same. Chase’s deck could have stabilized with his Dramatic Rescues and high toughness Flash blockers, he just didn’t get the love and I really punished him for losing the die roll. Game 2 ended on turn five as well. I felt much better about the deck. Hell, I felt pretty good about the deck as a Standard deck… Turn five in draft, pretty good!

I really like playing Li. I think I’ve been matched up against him more than any other 20ss regular. I had the pleasure of knowing for a fact that his deck contained no Delvers so I was feeling pretty good about that. Li lost round 1 and I got paired down. I was hoping to get paired down, just not against Li (for the obvious reason that he’s good at Magic). What can you do, at least we’re gonna have some laughs, right?

Turn two Rakdos Shred-Freak followed by turn three RSF he had some Rakdos creatures coming strong too. We raced, but in the end I again won the die roll. My clock was more Cuckoo than Grandfather and I took it. Though once I feared he had an Electrickery which would have been terrible for me.

We went 5 turns again. My horde of B/R guys just kept at the gates, and of course there was a game changing swing with one of his guys (Hellhole Flayer) with my Traitorous Instinct. I really, really like that card in aggressive decks. I ended the game a turn after with Rakdos Charm.

Li and I played a few games of Modern while we waited. I’m clueless in this format. Thanks to RtR I was able to afford a mana base for my Merfolk deck. More on that at a later date though.

I won the die roll again!

Tragically, Kyle got land screwed both games against me. I will say this though, I like Daggerdrome Imp. It’s important to have interactions with him, say like Scavenge or Pursuit of Flight. As I’ve learned in M13, drafting flying lifelinkers is good. Kyle was cool about getting mana screwed, and I offered to play him another game, he told me to not worry about it, he wasn’t too attached to his deck.

So I went 3-0 and literally won every game.

Rakdos is pretty sweet. But I also won every die roll. I was happy with my deck and really did a good job of making sure my curve filled out during draft. I’m sure this deck would have suffered in the late game, but did have a few nice big creatures and cards like Hellhole Flailer and Deathrite Shaman to get in the rest of the damage.

Other Underrated stars… Won game 2 Vs Li with Rakdos Charm‘s last ability, Guttersnipe is OK as a Gray Ogre… but with cantrips and removal spells he really gets nasty (even if he looks like a chicken thief). Tavern Swindler is not too shabby as a bear, its ability is sort of lackluster but it attacks for 2 on turn 3 sooooo…..

Matt Jones showed up after round 2.I had procured his classic T-shirt in size medium. He and Li tried to persuade me to play at States. I almost took off work for it, but realized I had a show with ZAC CLARK and the GRISWOLDS the next day.

More over, I was pretty excited about what everyone was going to play for Standard FNM. It’s Friday night and I have to bartend. I wanted to play, but life gets in the way from time to time. I’ll have plenty of chances to play later. Still looking forward to Tuesday nights Standard at 20ss. Since rotation, Standard is like “Let’s Make a Deal” right now  and I’m the guy looking to trade a small box for a tiger or a boat.