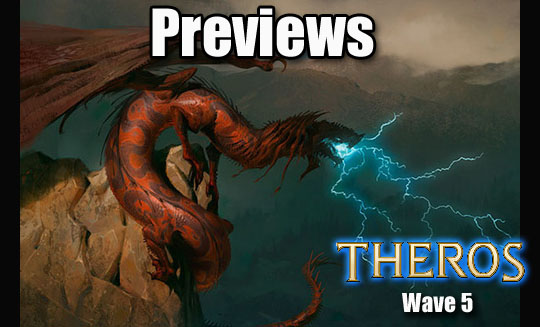 Back so soon? I figured you would be. After all, new Theros spoilers are being revealed daily and who doesn’t like some good news every day of the week? It’s like opening a little Christmas gift each day.

We have some pretty heavy duty cards to preview: 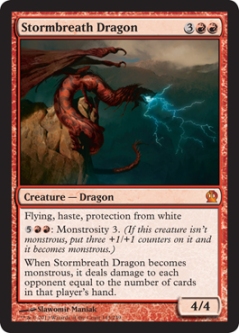 This thing is pretty huge as far as new mythics go. It’s almost everything we had in Thundermaw Hellkite and then some. We get one less power but a very awesome protection ability. This is one dragon that will NOT be getting Chained to the Rocks. Protection from white means you will be dodging things like Detention Sphere, Azorius Charm and the odd Pacifism.

It also mean attacking past things like Archangel of Thune. The Monstrous ability is not insane, but it does punish some more control decks that tend to keep a few cards in hand and grows this bad buy to a 7/7 as well. Not impressed? Then I don’t know what else to tell you. Oh wait! It’s also immune to Selesnya Charm, so you don’t have to fear making it Monstrous. What else … ? The card art is super sweet. You can also deal decent damage with it in a multiplayer Commander game. He’s a really great follow up to Purhphoros as he is bound to trigger the Devotion requirement and make him a creature. That’s a lot of damage in a small amount of time. Potentially 12 damage if it all goes unanswered. Or just a tame 6 if we deal the 2 damage from the Purphoros trigger ans only get to attack with our Stormbreath Dragon here.

I’ll spare you any makeshift decklist this dragon will appear in as I’m sure it won’t be tough to pretty much auto-include him in a Red/Green or on the high end of a monored list. 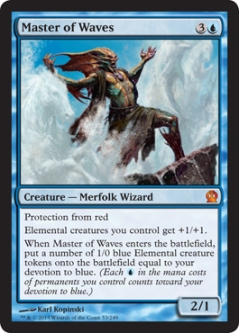 If Modern Merfolk ever topped their curve at 4, I’m sure this guy here is a shoe-in. With just a Lord of Atlantis in play you can have 3 2/1’s. Not impressed? Well, with a Grand Architect things can get rather disgusting (even without the Lord of Atlantis). You can just tap all your newly made elementals to cast a Wurmcoil Engine for starters. Not to mention that the tokens would now be 3/2’s. This is without having even cast anything on the 2 first turns of the game.

Oh yeah, he’s also pro red. just in case a burn spell might have ruined your day. Of course if your opponent removes him with another color spell you’ll lose your elementals too. Truly tragic, I know. You can always just have some kind of team pump enchantment in play or something of the sort. It’s not too hard to get creative on that front plus the rest of the set might have a goody or two.

At the very least he will be doing his fair share to fend off the hordes of red decks popping up on Theros‘ release. Don’t say you weren’t warned… 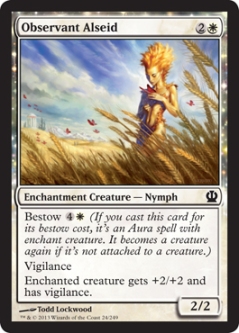 Not the greatest of creatures or not the greatest aura? Which to choose? Beats me, but I’ll probably always sleeve this if my draft or sealed deck is packing some Plains. Not the game winning card you are looking for, but a solid team player. 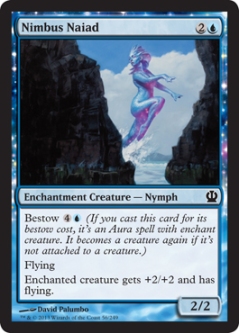 So many Nymphs, what is the Magic world coming to?

With all these Nymphs flying around, I was going to make the apropos Nymph enthusiast or one who is crazy about Nymphs joke. You might even say they are maniacal. Nimbus Naiad gives us another bestow creaturs with which to complete our potentially 3-5 color Nymph deck in Pauper. Someone’s going to break it, I just know it! 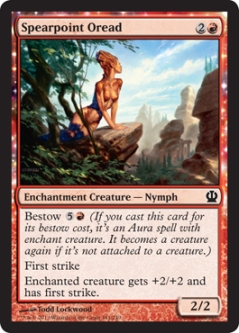 They’re all so adorable!

For some odd reason the Bestow on this one is higher. Whatever, we’ll be too busy beating down our opponents with our Nymph army to even care. If only they had like a queen of Nymphs and it made all their abilities apply to all Nymphs if they were in enchantment form (kind of like a weird Sliver effect). Also, anyone else think this is Wizards of the Coast‘s other ‘revamped’ mechanic that failed the first time (aka. Licids). 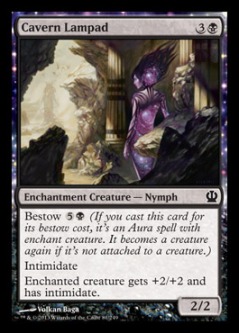 We get the fourth Power Ranger here and she’s as expected. Nothing too great, but what did you really expect? You can’t have one outshining the others, can you? The cycle is almost complete. 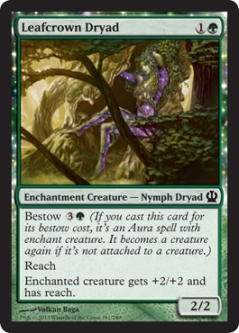 Best one yet? Perhaps

What? A Grizzly Bear that I can Naturalize? That’s terrible!

Actually, on top of having the Nymph AND Dryad creature types, costing the least to Bestow and the least to cast – she can block flyers to boot. Yes, she is pretty much the best of the bunch. Now all they need to do is to actually make some kind of lord for them so we can all cry as we open what might have been a more enjoyable rare.

Unless they make the Nymph Lord and Uncommon, then I’d be down for that. 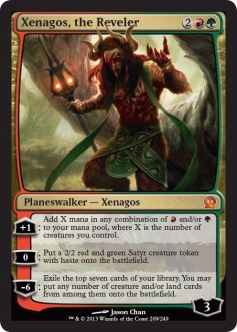 I don’t think anyone really expected another Red/Green planeswalker so soon. Let’s see: we had Sarkahn Vol first, then Domri Rade and now Xenagos. Wizards of the Coast realizes that there are 2 color combinations/guilds that have yet to even see one planeswalker, right?

A: What are Selesnya and Simic

Even if he seems to  mostly fit in a more mana ramp/creature swarm deck, I believe he’s basically just going to be sided into Red/Green decks for when they need more gas versus the most Control decks (probably Blue/White as usual). Xanagos allows those decks to recover very nicely from a Supreme Verdict. Pump out a 2/2 hasted Satyr and continue to apply pressure.

Let’s take a more detailed look at those three abilities:

So we get a nice little mana dorkish planeswalker ability. It can be pretty awesome or rather useless. Hopefully the next ability helps us in making it slightly better.

Here we get the Red/Greem Haste-related ability. Very much appreciated. It gives us so much game against our opponents, it’s not even funny. However, it does not boost Xanagos’ loyalty. You can even take down opposing planeswalkers with your little Satyr army. He works pretty well with Return to Ravnica block’s battalion ability as well. That might still end up being a ‘thing’.

Nice, not broken, but it’ll do.

So in Commander you get to put some big nasty creatures (Eldrazi) in play and do wrong things. Yes, yes. A lot of other cards will allow us to do that anyhow.

What’s great is that since technically the Gods count as creatures everywhere but the battlefield even when you don’t have devotion. Essentially you can still put all revealed God cards in play. Five color God tokens deck for the win! In a creature-based deck it’s hard for this ability to fail/whiff. As with Chandra, Pyromaster‘s ultimate, I don’t really see this being something the Red/Green decks will stive to do but as something that is a nice option if anything.

The card is also drawn by Jason Chan (who also illustrated Jace, the Mind Sculptor). That probably means Wizards of the Coast is expecting really big things from this guy. Just putting it out there.

One thing is for sure: with quite a few planeswalkers starting out at 3 loyalty and jumping to 4, it might be nice t have this card in your deck: 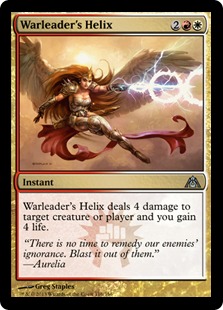 That’s going to have to be it for today. Until tomorrow, may we see what other goodies will appear in what is looking to be a very epic Magic: the Gathering expansion. 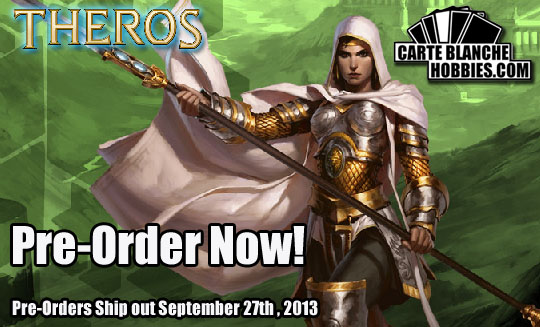