This is just infinite cool

Instead of the traditional starter display that we have had for quite some time in UFS, we have made the decision to give players a complete game experience for Street Fighter and introduce a 2-player turbo box, featuring Ryu vs. Chun Li. Inside the box includes 2 random Ultra Rares from the set, 2 complete Turbo Decks, 2 learn to play mats with Street Fighter posters on the back and an updated rulebook. This new take on the “Battle Box” will be something that is easily available to a much larger market, and is designed to help grow the core player base of the game.

That box art though

We are also going to be doing things a little more traditional when it comes to the release of the Street Fighter UFS set. Typically Jasco Games has done a pre-release and then an identical release a week or two after. With the introduction of Street Fighter, we will be promoting an actual “Pre-Release” event, which will allow players to see the booster material 1 week early. It will include select character full art cards for drafting, a completely new Street Fighter play mat for top performing participants and, of course, booster packs from the anticipated set! Following Pre-Release weekend, we will have the official release of Street Fighter UFS. Upon release, there will be a release kit that includes the Ryu vs. Chun Li 2-Player Turbo Boxes as well as the select format cards and more new SF play mats included in the Release Kit. Street Fighter will be tournament legal on the day of the official release. 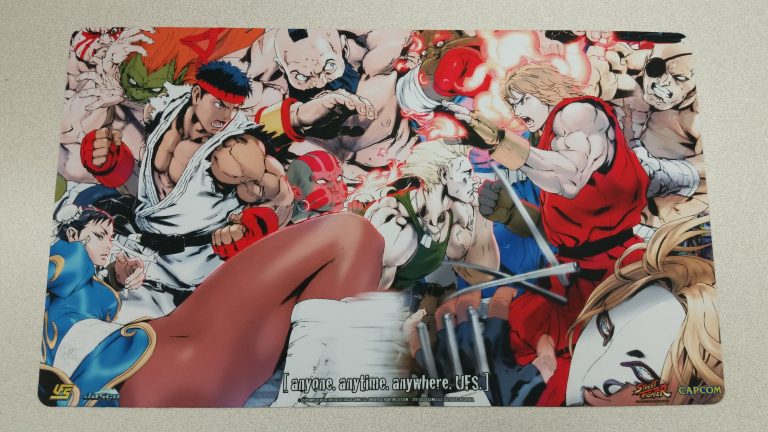 This is just beyond words awesome!

Starting later this year, Jasco Games will be releasing a whole new take on some of our older standard legal sets in UFS. UFS Platinum is a series of sets starting with Mega Man Platinum and Darkstalkers Platinum, that are intended to not only help newer players get hard to find older cards, but also incorporate a whole new type of tournament prize support for your local events! Starting with Mega Man Platinum, we will be re-releasing EVERY card from Mega Man including promo cards that were printed prior to Mega Man Battle for Power.

Every card in this set is not only re-printed, but is 100% foil with completely new foil patterns that have never before been seen in previous sets. Each platinum pack comes with 30 foil cards from the entire Mega Man franchise mentioned above as well as 2 completely unique cards that come in each of the Mega Man Platinum boxes (total of 32 foil cards per box). These boxes are intended as prize support for your local tournaments, and will also be available for individual sale. After Mega Man Platinum comes Darkstalkers Platinum which has the same formula and also 2 exclusive cards that are new to the UFS Standard environment (but may be something familiar to our veteran players). We will be showcasing some of these new platinum cards at worlds 2017 so be sure to check them out!