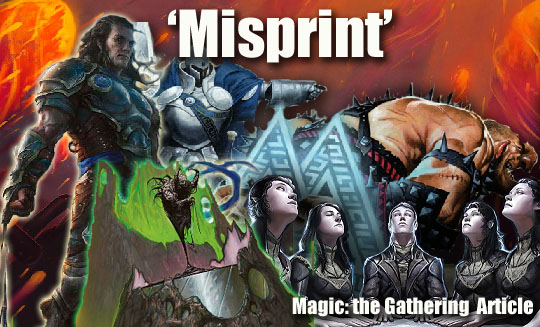 Imprint: the worst mechanic ever

I know what you’re thinking : “Why the random Imprint hate? Isn’t it like soooo last Standard season?”

You would be right too, IF that was the Imprint I was referring to. No sir! Today I am examining what a lot of players tend to do when playing Magic: the Gathering : Assuming they know card text and effects by heart.

A lot of you out there most probably have a good grasp of what all the cards actually do in Standard right now. Or do you?

I’m sure a few of you have tried to play Inaction Injuction as an Instant. I’m also quite sure you have mistakenly put a Rootbound Crag into play tapped even though you controlled a Temple Garden. These are somewhat ‘common’ errors and they are due to the fact that a lot of us use Mental Shortcuts.

In the case of Rootbound Crag, we have just been re-introduced to duals with Return to Ravnica, so it’s a matter of habit. We are used to, since a few years now, playing basics earlier on in order to have our Core Set duals come into play untapped. This pattern is somewhat ‘hard coded’ into our brain that it almost becomes second nature.

The solution to this mistake is obvious: “Read the cards!”

It’s not so simple you see….it’s just a land…a land that produces mana. It also produces 2 kinds of mana and sometimes comes into play untapped. There…simple…Right? Wrong!

You now have a new pattern to learn: Turn 1 Ravnica Dual, Turn 2 Core Set Dual. This is rather important for those of you planning on playing cards like Syncopate without randomly losing 2 life because you played your lands in the wrong order.

In the case of Inaction Injuction, we just assume that based on the card text, the card should be an Instant. I mean, it’s Blue for crying out loud! Why would it be a Sorcery? Well, it just is…most Detain cards are Sorcery speed.

We don’t have to go too far back to see a similar card being ‘Mis-Imprinted’ in our memory. The card is Revoke Existence.

Which bears a resemblance to a good old classic most of us are familiar with:

I was never a big fan of the last image. It somewhat reminded me of that fat guy in Dune.

Yeah, I know…you just threw up.

We basically associate Revoke Existence to Disenchant. Our mind makes that link almost immediately. Then it sees ‘remove’ instead of ‘destroy’ and we are like ‘Woah!’. We then eventually notice that it’s Sorcery instead of Instant. We then think “I guess that’s fair, it does remove the card after all”.

I am sure a few people out there have tried to end-of-turn Snapcaster Mage a Revoke Existence. Usually in game 2 of a UW Delver mirror-match. You are not necessarily a bad player for trying, you’re just accustomed to the way certain similar cards work.

Another common mistake is with cards like Mizzium Mortars. Sure it’s red and deals 4 damage most of the time and it kills Planeswalkers. Uh what? It doesn’t? but I thought Red cards burned stuff.

See, this card is more the exception to the rule that most red burn spells can either target players or creatures. Unless you have conditioned yourself to see it more as a Doomblade than Lightning Bolt, you might sometimes hastily try and target a player with Mizzium Mortars.

No worries, you’re not alone.

These are simple examples to more commonly played cards.

Let’s look at something different:

Ah! Yes…the famous Gideon Jura. He who has brought numerous aggressive decks down to a halt with his +2 ability.

Easy enough right? Your guys have to attack Gideon on your next combat phase.

Enter Hero of Bladehold. She makes a few dudes while attacking and boost the morale of your attackers. Great!

She does a few things that Mr. Jura does not want you to know:

The tokens that she puts into play are already attacking and can thus attack the player instead of just crashing into Gideon.

I’m sure some of you are aware of this interaction, but convinced that this is news to others.

That’s fine, really. Again, it’s a matter of what you picture Gideon to be. He’s the big bad wolf that makes your next attack phase futile most of the time. We’re just so used to him doing that and we assume that there is no getting around that. (Save for destroying him, removing him,etc).

A lot of times it comes to how we most commonly see a card get used. For instance let’s take another white planeswalker:

Easy enough to read the abilities and understand what they do. Pretty straightforward: boost your little weenies, hit your enemy with a major swing or maybe make tons of cat tokens.

That +1 ability is much more useful than you may think. It does for instance, allow you to put a +1/+1 counter on a Geralf’s Messenger and allow you to destroy it with say a Supreme Verdict later on without the fear of having it come back.

That +1 ability also meant being able to ‘target’ a Phantasmal Image a while back in Standard in order to ‘kill’ it.

If you read into it a little more, the fact that he starts at 4 counters could have been that they didn’t want any insane Sun Titan abuse on that -3 ability, but I digress…

Another card that I sometimes see people play sub-optimally is Sever the Bloodline.

This usually happens in Jund mirror matches. One player will try to remove the other’s Huntmster of the Fells from the game with it only to realize too late that it will remove his as well. Yeah….

On that same note, back when it was first released, a lot of people thought it played a bit like Cranial Extraction or Slaughter Games and that it also affected cards in hand, graveyard and library.

No, I’m not kidding!

Again, it is the cause of certain patterns we see and we jump to conclusion.

Let’s check out a card that does not see much play:

How many of you thought that you could attack with that creature before you had to Exile it?

I’m sure there are some who did something else that is not recommended in this wonderful game:

Read the card too fast.

Sure, it has a lot of text and we want to summarize it by just thinking : “Cool! I get to reanimate a guy each upkeep and lose him at end of turn” Somewhere in there you associate that kind of effect with these similar cards:

Again, this is perfectly understandable. You need to associate it with something similar.

Back when Doom Blade was spoiled, people referred to it as a ‘better Terror‘ or an ‘undercosted Dark Banishing‘. They needed to compare it to an existing card, because let’s face it : It’s pretty much another Instant Black removal spell we have seen so much of.

Mis-Imprinting an actual card with Imprint?

I have seen this misplayed quite a few times, but the common ones are:

A) NOT making a token at end of turn.

Yes, despite what a lot of you might think: a lot of players are still not used to the  ‘end of turn’ trigger having passed and then being able to active this afterwards. So they would wait and use it on their turn or just make a token to block.

B) Doing the end of turn token, but then making another one on their main phase. Only to find out that they just made 2 tokens of the same Legendary creature.

This really happened and the guy seemed pretty competent too. He made a token of Griselbrand and then another one on his Main Phase 1 so that he could deal a ‘lethal’ 14 points of damage. You can only imagine how red his face got when he realized his error.

Even in return to Ravnica, there have been a few misreads. Most notably:

It’s easy,no? I’m sure most of you have corrected it during lots of games.

-2 : the cards not chosen go back at the bottom of the library.

People familiar with Fact or Fiction will always just go ‘Fact’ when activating the -2.

In fact, it’s not ‘Fact’ at all. The remaining cards do not go to the graveyard. That would be a little too good in this format.

It’s easier for newer players that are not used to the older cards with similar effects, I guess.

Until next time: Read the F&*n cards!

Twice over if you must. Never assume you know what they do