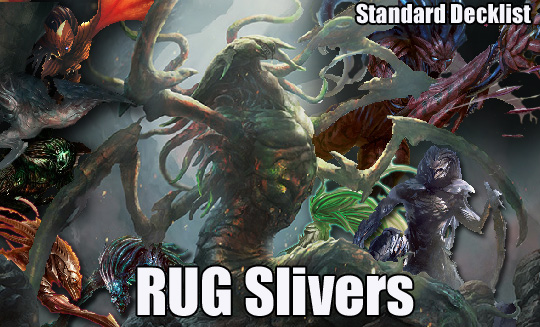 We recently had our little influx of new slivers come into the Standard fold in Magic 2015. While they are all pretty awesome, some are a little more synergetic with others. The 3 standouts are: Sliver Hivelord, Diffusion Sliver and Venom Sliver. I had been joking for most of the RTR/Theros Standard format that I wanted to build a RUG Slivers deck because I adored the interaction between Thorncaster Sliver and Bow of Nylea. Now this is much more possible with Venom Sliver. You can even the deathtouch goodness when you’re playing defense with Striking Sliver.

The reason for not going all out 5 color or Naya are rather obvious. Black was the most superfulous color before, only providing Lifelink (something a deck that is mostly going to be the aggro doesn’t really want/need). The latest addition it provided in Leeching Sliver just seemed worse than Thorncaster Sliver (yes, yes it cost less mana).

The White contingent of Slivers seems so deep at first, but upon closer examination is not that mana-efficient and doesn’t really give you good overall value. Bonescythe Sliver is all awesome and stuff when you’re laying down the early beats before your opponent can react, but he’s oftentimes a glorified Striking Sliver (especially when deathtouch is involved). Constricting Sliver is all “OMG! I want infinite!” until you realize that 6 mana is way to much for what is essentially a Banisher Priest. Also, how many slivers would you be holding back at that point so you can use them to exile their stuff? We aren’t exactly drawing a bunch here.

Sentinel Sliver is ok-costed, but aside from allowing us to attack and also use mana when Manaweft Sliver is in play … Meh!

Steelform Sliver is just not what we want to be paying mana for, nor wasting a slot in our decks. 4 Predatory Sliver is A) cheaper and B) overall better.

I can’t believe I almost forgot about it

Another reason for giving Slivers a try is that the mana is as perfect for it as it’s going to get. With 8 Standard legal sets and all the Return to Ravnica duals in circulation, it’s hard to argue. We even have 2 ‘rainbow lands’ at our disposal: Mana Confluence and Sliver Hive. Everything we are casting in this deck is a Sliver (save 4 cards in the main deck). Because of this detail, we can even hard cast a Sliver Hivelord without  even the aid of Manaweft Sliver or tutoring it up with Chord of Calling. 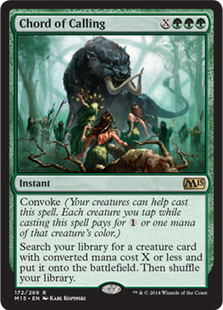 Ah yes! the glue that holds the deck together. It does exactly what this deck needs when it needs it.

Need some first strike to get your deathtouch slivers killing larger attackers?  Done

Want to clear the way by deathtouch pinging would-be blockers out of the way? Done

Need to protect one of your slivers from targeted removal, sort of ? Done

Hell, do you need to do something about that ‘lucky’ Supreme Verdict your opponent just topdecked? Done

The thing that makes Chord of Calling so good in this deck isn’t that we are infinite comboing our opponents like the Kiki-Pod Modern decks. It’s that it instantly affects ALL our other slivers and doubles as a trick up our sleeve. I’ve often found myself just ‘Chording’ for a Galerider Sliver to get my team of slivers through enemy lines in order to win the game. 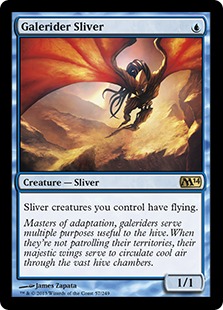 Quite the efficient flyer

The sideboard is very much catered to just more Chord of Calling targets as well as a few cards that can sometimes shore up weaknesses, such as all our stuff getting repeatedly Banishing Light‘ed and Detention Sphere‘d. Syphon Sliver even makes a small appearance in there, just in case you end up needing that extra little life cushion.

Another thing about the sideboard is that we really have to assume that we’ll mostly have 1 color at any time, so no random off-color spells or spells that cost 2 of the same color unless they are Slivers (Chord of Calling for similar reasons). No Boros Charms, Detention Spheres, Banishing Lights, etc. We pretty much have some Negates to protect our horde from mass removal (Supreme Verdict notwithstanding). The sideboard will probably flesh out more as the metagame becomes clearer later on.