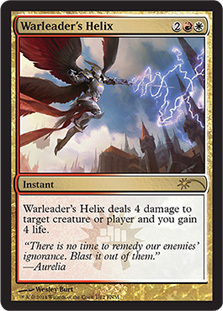 Warleader’s Helix was quickly dismissed as a bad Lightning Helix reprint when it was first spoiled. Nowadays, it probably kills most creatures (a lot of 4-toughness guys) like Loxodon Smiter, Kalonian Hydra, Archangel of Thune, Gray Merchant of Asphodel and the list goes on…. 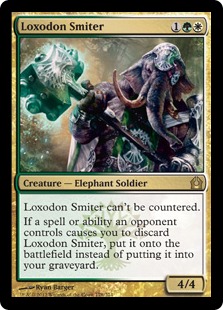 The card saw some play in UWR/USA Flash decks before Theros and is now usually relegated to Dega Midrange decks (BWR). It’s probably missing a more established and efficient deck to call home. Perhaps Naya and UWR will become more of a ‘thing’ with the release of the 5 other temples in the next Theros Block expansion. For now it’s just a good card without a good deck.

Sure, the original version actually has Aurelia, Warleader illustrated on the card, but it just doesn’t really seem like much of a removal spell. The FNM version has that whole ‘dark lightning’ thing going for it, reminiscent of Star Wars. The character (likely an ‘armored’ version of Aurelia) seems colder and might as well have a comic book speech bubble that reads : “DIE!”.

Remember that you can only get these in January 2014, which is still quite some time from now. Go to your local brick and mortar store FNM events for a chance to win them either randomly or by finishing in the Top 2. 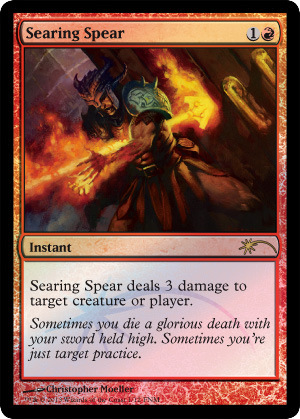 Standard’s version of Incinerate is hot

Searing Spear is seeing quite a bit of play in the current Standard format and it was nice of Wizards to make it January’s FNM promo. be sure to play in your local gaming store’s FNM for a chance to win one. We all love the quote and it is quite versatile as well.

Click the FNM logo above to find an Friday Night Magic Event near you!