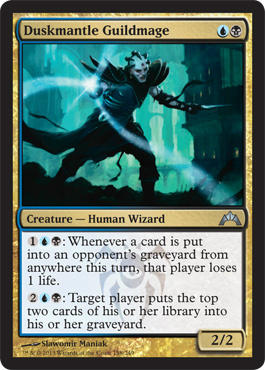 I guess this is the reason Jace, Memory Adept is selling out

So here we are with a nice little guildmage. As soon as it was spoiled, people saw the combo with Jace, Memory Adept and Mindcrank. He is also a nice little card in limited but obviously less combo-licious. ‘Grizzly Bears’ almost always make the cut in most limited decks when possible.

The first ability can be used with removal that can kill multiple targets or discard more than one card like Rakdos’ Return. That’s probably not going to be the goal with this card however. It’s pretty cool to see people so excited for a guildmage preview card as I don’t believe that ever happened in the Return to Ravnica previews.

Will the combo make Rest in Peace a must have sideboard card? or maybe Witchbane Orb? Perhaps…