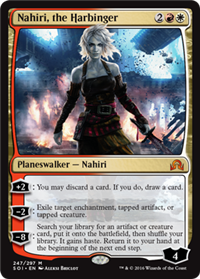 Not a bad mix of abilities for a color comob that can’t draw cards. Pretty sweet maindeck Naturalize, so for that alone we may see her in many sideboards. The ultimate is fairly unexciting, but if you’re packing a few board-changing fatties in a somewhate reanimator build then it may be worth it. Also, Madness… 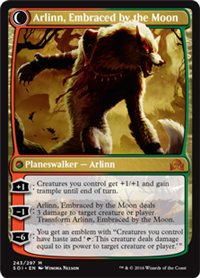 Arlinn Kord is somewhat reminiscent of Huntmaster of the Fells. It will be flipping a few times but not gaining you life in the process. The 5 total abilities will appeal to almost all casual players. With the new CMC ruling she may even be modern playable (ie: not dying to Abrupt Decay). Her ultimate is pretty nuts, effectively turning your creatures into removal spells much like a Warstorm Surge.

Ah, the mighty Jace! At 5 mana, he’s very average indeed. Still, much better than the one from M15, right? He is basically a flipped Erayo on ultimate, and it doesn’t take forever to get there so that’s not terrible. We get a very watered-down Jace, the Mindsculptor ‘Brainstorm’ ability. Still, if people tried to play Narset Transcendant in their Standard decks…. 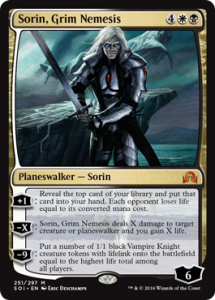 Ok, I have never seen a +1 ability as stupid as this. Yes, it’s based off of Baneful Omen and he does cost a whopping 6 mana. However, it’s his – x ability that’s sure to be activated quite often if and when he gets some of the Standard limelight. Being able to kill/finish off other planeswalkers is rather interesting. As with the original Chandra Nalar, killing off somewhat mid to fat creatures and still sticking around to do it again in a few turns is gravy!

The Commander-esque ultimate abilty is fine, but let’s not kid ourselves here: it’s not happening very often if ever.

There you have it! A brief look at the four planeswalkers we were promised by Mark Rosewater for what is sure to be a very very exciting revisit of Innistrad. Hope many of you will attend the pre-releases of Shadow over Innistrad to get a chance to crack one of these cool planeswalkers.