I have played against a few Orzhov decks in both Tiny Leaders and in Commander. I find that most people opt for Athreos, God of Passage as their general most of the time. A lot of these decks run quite a few token producers (one of the BW combination’s greatest features), thus making Athreos even less good. I then went on a little quest to make a token-based deck in the Tiny Leaders format. It’s by no means ‘the next big thing’. It’s just downright amusing to play and has a few interesting interactions without going overboard on the whole ‘boosting your tokens’ thing.

The deck is somewhat straightforward and tries to pump out tokens in an efficient manner. Teysa is basically a removal each time you cast her with a couple of her token buddies. She is also part of the deck’s infinite combo: 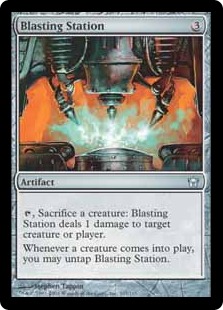 It’s essentially a 2-card combo, since Teysa is usually just sitting there in your command zone. You only need to find the other pieces. Darkest Hour is not that great on its own and even with Teysa, all it does is create a few ‘immortal’ chump blockers. Blasting Station is much more effective on its own with a few tokens. You get to zap a few creatures on your opponent’s end as well as use it to sacrifice your creatures for profit. I find it pretty nice with Ophiomancer. It’s not spectacular, but it’s pretty nifty. Since Ophiomancer triggers on each upkeep, you can make a Snake token on your upkeep and sacrifice it before the end of your turn. On your opponent’s upkeep, you will get another little Snake token and this will untap Blasting Station as well. You get to have a deathtouch blocker for anything your opponent attacks with or just sac the token at the end of turn to deal your opponent 1 damage. 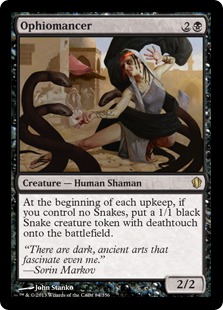 Much much better than I originally thought

Xathrid Necromancer is really good here too, since all but one of the creature cards are humans (not to mention the human tokens you can produce). This is also good for Avacyn’s Collar. You get to double up on your token making if those are both in play. You even get more value if Teysa is in play as well, since that zombie token will create a Spirit token when it dies (Which is funny, because I was under the impression that Zombies had no souls). Bitterblossom works really well with Teysa since it basically swaps your little Faerie token for a Spirit token once it dies.

Needless to say, a lot of games are going to be grindy with this deck. You’re not going to super turbo aggro people but you’re not going to be completely blown out either. It’s actually pretty rewarding to play. Of course, you might feel like you’re ‘durdling’ if you cast back to back Lingering Souls, Midnight Haunting and Raise the Alarm. I didn’t want to have many ‘Glorious Anthem‘ effects in here either. I figured Spear of Heliod deserves a slot for its secondary function. Since the deck is very very token-centric, Intangible Virtue is your go to creature booster. The vigilance part is really really great in a more aggressive format like Tiny Leaders.

Perhaps the deck’s biggest weakness is the mana base. It’s not super fancy or anything. It does the job, at least.

The only ‘spicy’ one of is Vault of the Archangel, but it’s almost a token deck staple. Essentially, it gives your tokens even more removal value at a steep cost. The lifelink part hasn’t been too awesome so far, but with Bitterblossom and not much lifegain in the deck …

It goes without saying that the majority of this deck’s card advantage comes from the token generators. Most people still associate the term with card-drawing, so we have a bit of that as well.

Mentor of the Meek is pretty sweet here. He is not much to look at as far as his stats go, but if he goes unanswered you will basically be drawing a card off each little token you create for a mere 1 mana. You get to have an improvised Phyrexian Arena with Bitterblossom.

The other little addition to the deck is Blood Scrivener. He’s probably my favorite of the Dark Confidant clones, since he’s affordable and has a relevant creature type. Plus, his ability can trigger at any other time you would draw a card, such as Mentor of the Meek‘s ability or with actual Phyrexian Arena (which could have also gone in the deck). You don’t tend to keep many cards in hand with this deck, so Blood Scrivener’s ability can become relevant really quickly.

Another thing to note is that a lot of Tiny Leader decks tend to go overboard on their removal package. You can thrive on this, by sending in your tokens to die first and hold of your better utility creatures for later. A probably exception would be Auriok Champion. She’s really worth that extra mana in this format, since she can actually stay in play for much much longer than Soul Warden or Soul’s Attendant.

Tiny Leaders Deck Construction:
– Deck Restrictions:
• 50 Card decks.
• Singleton (Only 1 of each card except for Basic Lands)
• All cards must be Converted Mana Cost 3 or less.
• Must include a LEGENDARY CREATURE as a General, which IS included in the 50 cards.
• Starting Life Total: 25
• No free Mulligan.
• No ‘Commander Damage’ rule.
• Tiny Leaders is a 2-Player format.

Give it a try!