Today I will share the second commander deck that I constructed, based around one of the most aggressive strategies available within Magic: the Gathering blowing the s*it out of EVERYTHING.
The Reaper King is a very aggressive commander in the sense that it is akin to having a plunger rigged to ignite explosives every time a scarecrow comes into play. The deck’s legion of scarecrows, changelings and other big creatures gets this deck rolling and almost nothing is safe whenever a scarecrow comes into play (so much so that I actually had to promise not to destroy basic lands with my playgroup when using this deck). When the deck is not popping out scarecrows, then it’s drawing cards and looking for other ways to win by grabbing a big creature or comboing off.

As with most of my decks, this one is pretty budget-friendly as far as Commander goes (the lands could be WAY better, but I made due with what I had). Regardless of price, this deck plays well and requires a bit of subtlety to play. There are times when you need to pull back and be conservative and it appears that you’re not doing anything in particular.Other times, you’re just pushing the plunger down over and over again, forcing your opponents to stop you somehow.
Harvest time is not always a pretty thing after all…

That said, here is my take on the Reaper King deck.

As I have just mentioned, Reaper King is a very aggressive commander. When he gets summoned out, he immediately wants the party to begin. The more scarecrows (or scarecrow-like creatures) you can summon once he’s on the field means things will start exploding very quickly.

So naturally, your opponents will try and counter him or spot remove him off the field, leaving you grinding to a screeching halt. This is where some of the support spells and some of the utility creatures come into play. Slapping on Lightning Greaves will protect him from spells, whereas either a Darksteel Plate equipped or a Darksteel Forge in play will protect him from destruction and board wipes. Having both on him would be ideal of course, but even without these artifacts in play, there are other ways for the deck to deal damage without your commander.

The creature list in this deck has two major recurring themes: artifacts and changelings. The number of scarecrows and changelings in the deck, 13 in total, mean that you will almost always have a “scarecrow” to throw out once Reaper King is in play. Add in three “clone” creatures (Quicksilver Gargantuan, Phantasmal Image, and Clone), the deck essentially has 16 scarecrows to play with.

However, the three clone-type monsters don’t necessarily have to copy a scarecrow. The other 17 creatures in the deck have a lot of synergy with the rest of the creature package, either drawing you cards, mana ramping, or providing nasty little tricks for you to play with.

Mirror Entity, one of the many changelings in this deck, has the unique ability of paying X to turn every creature you control into an X/X attacker. That’s right… X/X on ALL your creatures. With enough mana, tapping out could yeild you a bunch of high-powered attackers, some of who might have flying! It’s a pretty evil thing to do when no other plays are available to you on any given turn.
There are the 13 cards that either draw you cards, ramp your mana, or fetch cards from your deck or your graveyard. Etched Monstrosity, Etched Oracle and Mulldrifter profide card draw in creature form, whereas Etherium Sculptor, Grand Architect and Composite Golem either make artifact spells cheaper to cast or provide you with additional mana to use. Solemn Simulacrum fetches lands, while Sphinx Summoner tutors for artifact creatures, both of which can be reused multiple times via Myr Retriever and Sanctum Gargoyle if they hit the graveyard.

Last we have the big bad seven, the creatures in the deck that provide plenty of utility. Esperzoa, Flickerwisp and Deadeye Navigator all provide you with varying abilities of bouncing creatures off and back onto the field, recycling scarecrow plays and making Reaper King‘s ability go off for as much mana as you have (Deadeye Navigator is definitely the more dangerous of these three). They are also able to make multiple uses of come into play abilities.

The other four creatures however, bear the biggest mention. Kuldotha  Forgemaster allows you to cheat any artifact into play, including the 9-cost Darksteel Forge! Progenitor Mimic will clone of ANY creature out when he arrives and then spawn a token clone during your upkeep. While copying a scarecrow would be the best play most of the time, he can also come in and clone your other utility creatures if you need any more uses of their abilities. For example, spawing a token of a Solemn Simulacrum every turn means a free land and potentially a lot of card draw later on. Master of Etherium‘s strength and toughness is equal to the number of artifacts you control (which in this deck is A LOT)  and gives other artifact creatures you control +1/+1. It’s none other than Prophet of Kruphix that takes the MVP award of the creatures in this deck, allowing you to always have your mana ready during each of your opponents’ turns, with the added bonus of flashing in creatures in response to anything your opponents do! 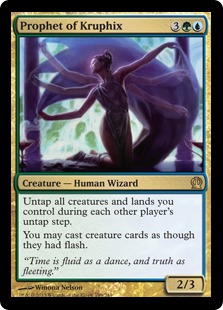 “Do you like flashing in creatures? Well, who the hell don’t?”

While the prospect of flashing in scarecrows every turn is definitely appealing, it also backs up the hidden win conditions within the deck. In fact, lands in this deck CAN end in your favor…

Normally I like discussing important lands at the end of anything I write about, but this is an exception. As the deck list reveals, Maze’s End IS a card in the deck, along with all ten guildgates. Winning with Maze’s End is VERY unlikely and VERY hard to do (though completely doable if your opponents can’t do anything about it), but it also provides you with another way to ramp.

Maze’s End: so good that it made it on the Dragon’s Maze Game Day Champion Playmat

While Maze’s End comes into play tapped, every turn it untaps means a free dual-land, especially when activated at the end step before you start your turn. It gets much better with Prophet of Kruphix out too. If you can protect Prophet with Lightning Greaves and Darksteel Plate AND keep your opponents from ganging up on you (by, for example, blowing up their lands with Reaper King), you become a ticking time-bomb that will end the game in a very spectacular fashion (and believe me… the feeling of actually pulling it off is hard to describe).

Of course, that’s a lot of if’s and but’s… that is where the non-creature spells come in.

A five-colored deck can mana-hose you sometimes, which is why having the right colors at any given time is crucial. Chromatic Lantern fixes the problem quite handily, and Expedition Map will fetch any land you may need at the time. Darksteel Ingot, Gilded Lotus, and Sol Ring provide additional mana sources.

The rest of the non-creature spells are in the deck for varying purposes, the most common tied to abusing Reaper King‘s ability. Strionic Resonator and Illusionist’s Bracers give you two booms for the price of one, and Conjurer’s Closet flickers out any creature at the end of your turn. Mimic Vat does its job of dropping tokens, and is not limited to your own creatures.

The Rolls Royce of come into play effects

The last few spells provide untility to tutor for specific cards, draw additional cards, and if needed wipe the field or exile permanents if things are getting too crazy. But a few bear mentioning for the specifics of this deck. Unwinding Clock untaps all your artifacts during every upkeep, allowing you to use things like Gilded Lotus and Strionic Resonator every turn in necessary. This becomes absolutely disgusting with Prophet of Kruphix out, as all your permanents basically reset everytime someone’s turn starts.

Door to Nothingness is also a card in the deck that will kick someone out of the game, and thanks to certain creatures that return artifacts to your hand its possible to slam the door multiple times. Elixir of Immortality gives a bit of life gain, but also allows you to make sure your deck recycles all of its good stuff.

Finally, the one spell in the deck that NO one wants to see cast is Rite of Replication. Clone a creature for 4 mana or clone five times if you kick it for an addition 5 mana is pretty good, but when used on Reaper King himself is a staggering, and admittedly very dirty play. Having 5 Reaper Kings enter the battle field triggers ALL Reaper King’s abilities, and doing the math shows that 20 permanents get blown up in one sitting. Add Strionic Resonator or Illusionist’s Bracers to the mix, and you might as well have dropped a nuclear bomb on the battlefield.

In the end, the Reaper King deck can swing is many ways and can be modified so many other ways to match different playstyles. This is the version I am happy with, and with new sets coming out there will always be new things to try.
So what deck should I construct next? With so many potential commanders already out there, I just might wait to see some of the new legendary creatures coming out with the new sets. With Born of the Gods out, who knows what kind of tomfoolery will be created? I guess we’ll just have to wait and see.
Until then, happy gaming people! 😉