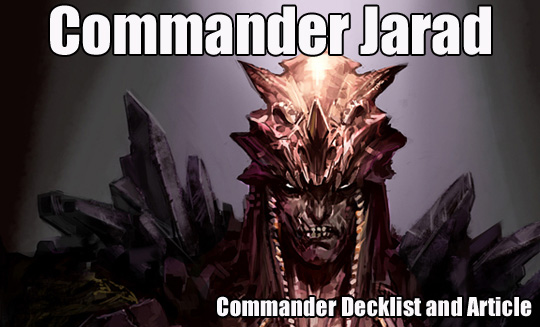 Jarad is one of my favorite commanders ever. I’ve been tweaking my jarad deck ever since it was printed. I love having a commander that is a sac outlet, it allows you to build your deck around sacrifice abuse. Jarad is also a powerful win condition, especially in multiplayer since his ability affects all opponents. Today i will share my current list which is the result of a lot of playtesting:

My mana fixing lands can obviously be improved, eventually i will get more fancy duals because the deck is pretty color intensive. We have a few utility lands and I think the usefulness of those lands justify the downside of have a few colorless lands. Shizo can give Jarad evasion, sometimes he gets big enough that a commander damage win is possible. Rogue’s Passage does the same but for any of our numerous potentially very large creatures. Bojuka Bog is free graveyard hate, it also makes Living Death better for us. The cycling lands are here for when we flood and they also go well with Life from the Loam. Svogthos for when the board is empty and the grave is full, people tend to forget about him so he can be a good surprise. Strip Mine goes into any Commander deck.

Sometimes referred to as ‘Steve’

We want mostly land fetching creatures that die. Land fetchers are better than artifact mana because lands are harder to destroy than mana rocks. We want creatures that die so we can recur them and also because them to add to the creature count for our ‘graveyard matters’ cards. Some of our creature ramp can even search for two lands, which is very good if you don’t have much else to do in the first 4 turns. 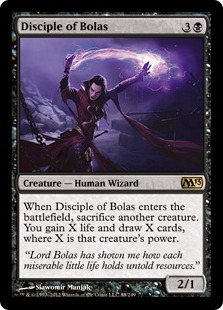 Thanks goodness this is no longer Standard-legal !

Card advantage is good and we already have plenty of it in the form of sweepers and recursion. Regular card card draw helps as well. Graveborn Muse is pretty good with a zombie commander. Disciple of Bolas has saved me from many losses because of the lifegain aspect. Remember that the more creatures you dump in your graveyard, the better thing get.

Sweepers are good in Commander. They are even better here because we can recur creatures from our graveyard or fill our graveyard for our “graveyard matters” cards. We have a few removal-creatures that can be recurred as well. Also, Savra and Grave Pact take advantage of our sac-outlet commander. I picked Wickerbough Elder over Acidic Slime because it is fetchable with Dimir House Guard and also because you can get extra value with a small Black Sun’s Zenith (more counters on it and reuse its ability) ! Toxic Deluge is my new favorite sweeper because with enough life investment, nothing can survive it. Pernicious Deed gets rid of all those mana rocks and tokens so you sometimes play it early and discourage opponent from playing their stuff.

Huh, they unbanned this thing?

Many of our heavy hitter are also creature killers and recursion as well. It That Betrays is crazy with all our sacrifice stuff. Death Cloud with him on the board is usually GG with overkill. Necropolis Regent is a lot better than she seems as  I’ve gotten to crazy amounts of counters with her. The longer she lives the deadlier she gets, especially with Jarad. Kokusho is also rather good with Jarad. Things tend to degenerate after that point.

We have many cards that grow bigger as we fill our graveyard. Any huge fatty can be game winner with Jarad’s sacrifice ability. Spider Spawning is a card people tend to forget about. It usually just stays in your graveyard and then late game after a sweeper you spam the board with cute Spider tokens. Reach is also a nice bonus. Nightholwer bestow and Bonehoard equip allows us to win through even a Humility. They also can turn any creature into a huge fatty for winning via Jarad’s ability.

Bringing back stuff from the grave is pretty powerful. Genesis acts from the grave so you can gain card advantage and card quality just by dredging forever. Living Death tends to win games, especially when you can play it again and again with Eternal Witness or Xiahou Dun (try getting the Fudge Promo if you want a affordable version). Xiahou Dun + Profane Command allows you to repeatedly kill stuff. Dawn of the Dead is very effective with a Commander that has a built-in sac ability. You can recur something then sac it so it doesn’t get exiled and recur it again next turn.

Yeah, you read the text right. There’s no errata – any card

Filling our graveyard is important and we have many ways of doing so. Life from the Loam can help you not miss land drops by casting it (even with no targets) and Dredging it next turn. It is also good if you Dredge a Strip Mine. Golgari Grave-Troll is also another ‘graveyard matters’ creature. With 8 mana and jarad out, you can win by casting it, saccing it and then Dredging it next turn and so on. Stinkweed Imp is the second best Dredger and also happens to be a nifty political tool, discouraging your opponents from attacking you. Deadbridge Chant‘s self-milling ability is good, the recursion is nice too if you can abuse it with Scavenging Ooze and a small graveyard: just exile things you don’t want from your own graveyard and you’ll always get the good stuffback !

Tutors are good in EDH. You can put Genesis in your graveyard with Buried Alive with any two other target creatures you want. With Jarad’s Orders you can put any fatty in your graveyard and put Phyrexian Delver in your hand and reanimate the fatty the next turn. Survival of the Fittest is the best card of the deck, it tutors and fills your graveyard. The deck is built so that you can search for anything you would need in any situation with Dimir House Guard. The fact that he is a creature allows you to recur it for more searching. With all the tutors, you can also search for combo pieces you need to end the game.

I like to have combos in my Commander decks because the game has to end at some point if no one can win via the traditional route. Altar of Dementia is much more than just a combo piece. You can win by milling your opponent. You can also sac stuff for free and self mill for value. The combo is with Altar, Mikaeus and Puppeter Clique. When you sac Clique you choose if the Persist trigger or the Undying trigger resolve first. You can just alternate between the two and go infinite, milling everybody. The other combo is with Mikaeus and Triskelion. Remove a counter from Triskelion to deal one damage to an opponent, then remove the two other counters to deal the damage to himself, killing him (since Mikaeus gives him +1/+1). With no counters left Triskelion will come back, allowing you to deal damage again and so on. The third combo is with Triskelion and Phyrexian Devourer in the graveyard with a Necrotic Ooze in play. Phyrexian Devourer has been reworded so you can ignore the text on the card. The correct wording is:

When Phyrexian Devourer‘s power is 7 or greater, sacrifice it.

Exile the top card of your library: Put X +1/+1 counters on Phyrexian Devourer, where X is the exiled card’s converted mana cost.

With Necrotic Ooze, you use Devourer’s ability to exile your library and win with Triskelion‘s ability. The final kill is with Jarad and Phyrexian Devourer. You just keep using Phyrexian Devourer’s pump ability, letting it resolve each time. When the sacrifice trigger goes on the stack, you pump it again in response. You will end up with a huge creature that you can sacrifice with Jarad for the win. This also works with Necrotic Ooze and Phyrexian Devourer in the graveyard. I’ve counted the total mana costs of the cards in the deck and the total is 266. If you milled most of your deck you might want to count the mana cost of the cards outside your library just to make sure you can go for the kill and not mill yourself only to lose. Both Necrotic Ooze and Mikaeus, the Unhallowed are also pretty good cards straight up even without the combos. 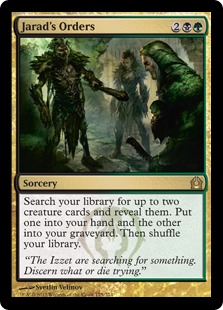 Jarad orders you to have fun !

Jarad is a very fun and powerful commander. He can attack from many angles, with either life loss from his ability, commander damage (since he can be huge) and value from sacrifice. Sometimes when you have lots of lands in play, you’ll want to put him in your graveyard when he dies in order to use his recursion ability and cast him for the normal 4 mana so that you can activate his ability right away. The deck is designed to abuse the commander but it can win without him, thanks to the powerful interactions amongst the other cards. I’ve been playing Commander with Jarad since he was printed and I’m never bored/tired of playing with this particular deck.

I urge you to give the deck a try and have as much fun with it as I do!