There’s a cute back story to be sure, but the cool part here is that we get two pretty nice planeswalkers. It’s not like that failed Sorin vs. Tibalt abomination or even the less popular Nicol Bolas vs. Ajani Duel deck. This one actually contains two very desirable planeswalkers and two color combinations we have not really seen paired up against each other (well, Izzet vs. Golgari might have been close). 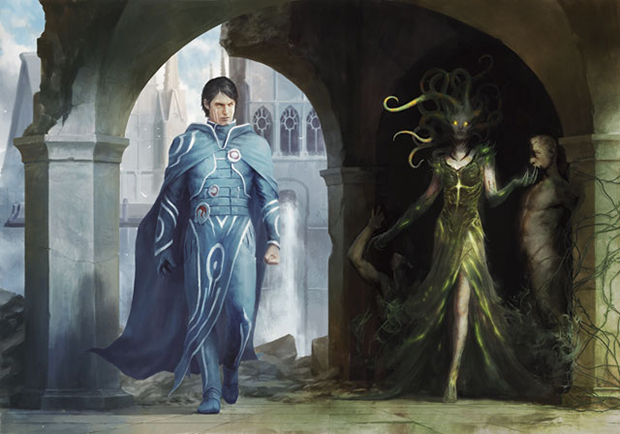 Definitely not a huge fan of the planeswalker art

It probably seems better if you view it as getting this:

It would also be cool that if you were to maybe combine the two decks you can end up with a really nice BUG control deck, as I imagine both decks will be very much control-ish in their own right. Maybe give the Jace deck a bit of the Monoblue Aggro elements we have seen at the recent Pro Tour. You can then maybe get some of the Monoblack Control elements of the Monoblack deck that Top 8’d the Pro Tour as well. I’m not saying we will get some insane value, but Wizards of the Coast knows how to market these really well.

Remember: it comes out on March 14,2014 so don’t hastily get rid of all your copies of these two cool planeswalkers just yet – March is quite a while from now. As of this posting, Jace’s value alone is almost double this Duel Deck’s MSRP.