Back already! A few nice cards were recently spoiled, so let’s take a look:

Woah! I had to actually do a double take after reading it through. Essentially we get a ‘better’ Moonsilver Spear. Instead of getting a 4/4 angel when we attack, we get to have a 4/4 when we are down to no creatures. How useful is this? Very.

Bonfire of the Damned got you down? Well, now you get to at least defend yourself with a 4/4.

Just played a Supreme Verdict ? What are you waiting for? Attack!

How’s that for big?

Another neat feature after you’ve equipped and attacked is that you can then activate the untapped Haunted Plate Mail in order to block any retaliation/counterattack. This is probably going to be seen quite often if this little piece of equipment becomes popular, so keep an eye out for it.

It’s probably one of my favorite rares in M14 as it can also easily be put into a Commander deck where quite a few people just spam a bunch of planeswalkers and play multiple Wrath of God, Day of Judgment, etc. 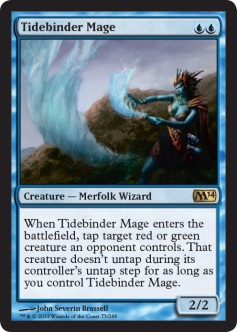 Take that you Greenie Meanie!

This nice little utility merfolk brings us some answers to Thragtusk in Standard and quite possibly Tarmogoyf and Scavenging Ooze in Modern. I mention mostly the green creaures because red is more apt at removing our little merfolk wizard here. Plus, there aren’t that many huge red guys you want to tap down (aside from maybe a Thundermaw Hellkite).

I can also see it getting some much needed sideboard use in Merfolk Legacy decks that sometimes have issues dealing with Maverick creatures like Knight of the Reliquary. The problem is what to side out, but I’m guessing the Cursecatchers are the first to go in that matchup.

In a more casual environment you can amuse yourself by utilizing this guy with artifacts like Distorting Lens.

Works well with all of the color-hate creatures

Our final little spoiler today is clearly not as ‘cool’ as the two first, but he does have his uses. 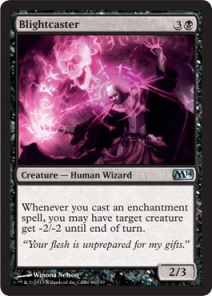 You can get pretty creative with little wizard. He works really well with self-bouncing Auras such as Shimmering Wings . My main gripe so far as it was with the previous Core Set is that they still have not printed an ‘Enchantress’ card  like Argothian, Verduran or Enchantress’ Presence. Playing a ton of Auras or Enchantments is not very exciting without those.

In limited he will truly shine since he basically adds value to whatever enchantments you decide to include in your deck (Pacifism, Claustrophobia,etc)

See you soon for even more previews of Magic 2014! 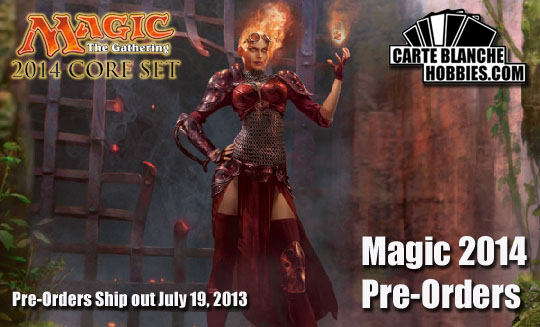