How good is this card? Probably every Green/White aggro deck will run it. You cast it, your opponent plays a Restoration Angel at your end of turn step, BAM! free creature! not just some whimpy 1/1 token either. A token that can actually end up being larger than Restoration Angel.

Your opponent wants to kill it with something like Devour Flesh? Well, the trigger of  Voice of Resurgence goes on the stack, produces a token and you get to sac the token. You can also let the Voice die, in which case you will get another token (there are not really many situations you would want to do this though (unless you would get a really sizeable token, but at that point Devour Flesh would have sucked anyways).

What else does your opponent usually play on your turn? Counterspells ! This will maybe get him to reconsider countering a random creature spell. The token produced may end up being larger and more relevant than the creature you just cast (ie: Avacyn’s Pilgrim).

I would rank this thing as I would other hate cards like Gaddok Teeg normally. This card, however, is not Legendary. It’s going to be in really really high demand. I think its price will be close to the 15-20$ and has great potential of surpassing that price in the long run.

I highly recommend getting your playset as soon as possible, you might regret not picking these up early.

Council of the Absolute

Wait a second! Have we not already seen this picture?

Once again, we have the lovely 2/4 stats. We get part Meddling Mage and part ‘mana reduction thingy’. Whatever expression you want to use for it, it’s pretty much a sort of derivative of Grand Arbiter Augustin.

The most immediate use I could find for it (quite fascinating!) is this card:

So we get to effectively ‘negate’ our opponent’s copies of the card and make our Sphinx’s Revelations cost less? It’s non-legendary to boot, so don’t hesitate to drop multiples (even naming the same card). They act as pseudo Sol Ring but just for the name card of course. Good stats, ability but ugh! another Mythic! This feels more like a rare to me, but oh well… It’s going to affect its availability and raise its price in the short run.

For now, I see this being 12-15$ and then it will just stay in that range for quite some time. Get yours now!

Why could they not have given this an extra point of toughness? I’m guessing they tested it and it was a little too strong? Perhaps… I’d try this in my low budget UR pingers deck for kicks. It’s obviously a card that illustrates the Izzet well. Potentially good effect, but it can maybe backfire.

Flying Goblins are pretty hilarious too! It seems like an Unglued card, but I think I would try one in limited once in a while. Who knows? 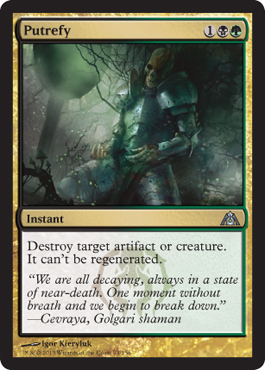 Yes! So glad to see this back!

After being reprinted in Izzet vs. Golgari, I had a feeling this would somehow return to Standard. It’s one of my favorite cards as it combines Naturalize/ Murder (or Dark Banishing, Terror for the old school peeps). The can’t be regenerated part seems less important these days, but it’s a nice bonus. No longer does a Golgari, Junk, BUG or Jund deck have to decide on how it wants to deal with creatures and/or artifacts. You almost always have a target with this card.

It’s also one of the few targeted removals that hit any creature (barring protection of course) along with Murder and Orzhov Charm. 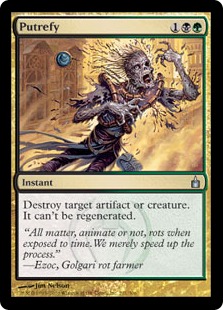 You can still pack the ‘older’ versions in Standard

If you don’t already have your playset, get one now or keep your extra copies from future draft/sealed events.

Great versus Geist of Saint Traft

The ideal scenario for this is when your opponent has a random dude and another guy with Hexproof. You bounce the one you can target and make him sacrifice the other one.

The other play would be to bounce your creature in response to a removal spell and then make him sacrifice one of his (of course with 5 mana untapped, your opponent might have a clue that you are holding this).

As with all split cards, they offer a good deal of flexibility and being able to cast both sides when compared to split cards of past sets, is just gravy!

You get to ‘fight’ for free

This one is probably one for the Bulk rare pile. The graveyard hate half is rather costly, but the other half shows lots of promise.

A lot of people will try to get the ‘Blood’ half to work and who knows, it just might. You get a Pit Fight only better (it is a rare after all). You can hit the player directly and if you manage to go for a full Fuse on this you get a great finisher!

Keep checking out the Previews for more ways you can improve your current decks or create new combos!