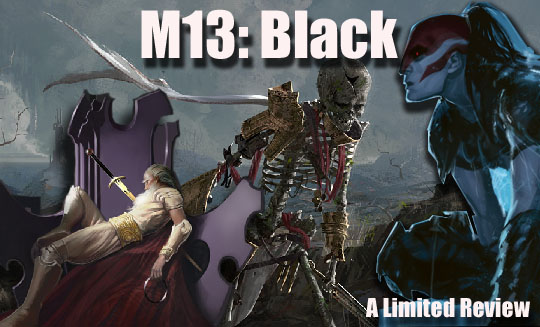 I never really play this card as I consider it a little too sketchy in a limited environment. I suppose if you are playing a really controlling deck or your opponent is playing more of a token-spam strategy, you might want to play this card.

Otherwise I would almost always pass this in Draft and ignore it in Sealed.

Bloodhunter Bat
It’s hard to argue with this, since:

A) it’s a decent-sized flyer with a good ability.

B) You will always include this in your decks for both the agressive and the control type of deck since you get an attacker, blocker, some damage and lifegain.

Bloodthrone Vampire
What made this vampire playable in M11 was because of two card, Act of Treason and Fling.

They had an amazing synergy between each other. In this set though, the Act of Treason effect is now an uncommon card in Mark of Mutiny and Fling was not printed. I could see Bloodthrone Vampire working alongside Disciple of Bolas if you want to process all your useless creatures to draw and gain a lot of life or with Fungal Sprouting as a method of boosting your Vampire or having a high powered creature.

Cower in Fear
I haven’t had much experience with this yet. It looks like a neat combat trick while removing all of your opponent’s one toughness guys, of which there are a lot in this set. This is a decent pick in draft but it’s still not as good as Murder.

Crippling Blight
This deals with the problematic one toughness creatures and puts a stop to Giant Scorpion and Deadly Recluse. I would play at least one in my deck, and side in some more if necessary.

Dark Favor
I have mixed feelings about this enchantment.

On one hand, if they don’t deal quickly with your enchanted creature, you will win (i.e. putting this turn two on a Tormented Soul). On the other, you always have the chance of getting two-for-oned. When making your deck, you can go either way and during sideboard you adjust accordingly to the number of removal you’ve seen in your opponents deck.

Diabolic Revelations
This card is powerful but very hard to use in my opinion. The main difficulty stems from how long do you keep it in your hand. If you’re a greedy person by nature, try to cast this for less value than you’d like. If you think about it, getting any two cards in your deck is already great.

Disciple of Bolas
Disciple of Bolas fits a deck with big creatures, so it pairs well with Green. Even if you sacrifice a four-power guy, you can get a lot more in 4 cards.

Disentomb
This sorcery can be regarded as adding B to any of your dead creatures, so if you have any creatures worth bringing back, add this to your deck.

Duress
Usually decks have between 4 to 8 non-creature spells, so playing this maindeck can be decent. Personally, unless I see something that I really need to get rid of or that I don’t have enough playables, this will stay in my sideboard most of the time.

Duskmantle Prowler
The question you ask yourself here is, would you pay 3B for a 3/3 haste? I would in a heartbeat. Of course, it’s not always going to be a 3/3 but that’s balanced by the fact that he has Exalted and that it would stack with other Exalted triggers.

Duty-Bound Dead
This is probably my second favorite black common from this set. It can provide the early attack, stay back and defend later in the game while still boosting your attacker. One of the most versatile creature in M13.

Essence Drain
Removal is removal even if it costs 5 mana to cast.

Giant Scorpion
Great defensive creature. If you compare this to Deadly Recluse, it doesn’t have Reach and costs one more. But the biggest difference here is the additional toughness, it gives him so much more survivability in combat. Usually creatures can simply trade with the spider, The Scorpion just blocks most of them because your opponent won’t want to trade a 3 powered guy for this.

Harbor Bandit
You need an Island to play this creature, don’t add him to your deck if you don’t. When you do have the required land, this guy becomes a scary monster for your opponent.

Liliana of the Dark Realms
Whenever you play a Planeswalker, it’ll immediatly put a target on their head. In Liliana’s case, I think that’s her best ability, followed by her removal and her deck thinning, land searching ability. It’s quite an awful Planeswalker to have in Limited.

Knight of Infamy
A very cost-effective creature. It affects the next attacking creature and if you drop it early enough, it can get some serious damage in.

Liliana’s Shade
This is a good Shade. First, you don’t lose any card if it gets destroyed. Second, the land you get is useful to his Shade ability.

Mark of the Vampire
Auras are always a risky gamble, if you control a Blue Ring, Black Ring, Hexproof guy. You might side it in if you see that your opponent has no removal.

Mind Rot
In all my years of playing Magic, I still don’t have any clue on how to rate this card. You can get card advantage if you draw it early enough, but late game, when all of the spells are ripped from the top of the deck, it becomes a dead card. I would play it if I don’t have anything else to play. 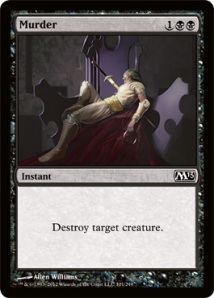 Murder
Best Black Common. It gets rid of almost anything. In a Draft, the good (and bad) thing about this card is that it costs 1BB, which means that it’s not splashable. It’s bad because when you’re gonna see it while you’re not in Black, you’ll just pass it. And good when you’ll be in Black because there is going to be a higher number of Murder in circulation.

Mutilate
Even if you’re playing light Black, as long as you’re able to cast it, you’ll at least get -2/-2, which is in my opinion, very good.

Phylactery Lich
Maybe if you have between 5-8 artifact, this could be playable. And even then you still have the problem of the harsh mana requirement of BBB. 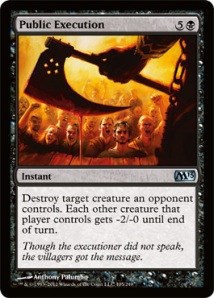 Public Execution
This is what you get when Murder and Cower in Fear have an infant.

Ravenous Rats
It’s very good in this set since you have exalted in Black, which can give the rats a second use.

Rise from the Grave
Black is the color that kills creatures. It can effectively bring back any creature you’ve had trouble with and turn it back against its master.

Servant of Nefarox
It has a direct effect in game when played and it has a nice attacking body.

Shimian Specter
If your opponent can’t deal with this, he’ll go into top deck mode. Plus, you get to see what he plays in his deck to make your future choices including sideboard. 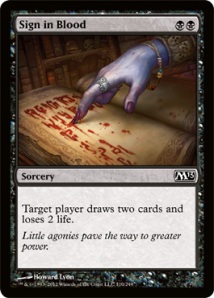 Sign in Blood
Good card draw. I prefer this over Mind Rot in terms of card advantage, also it can kill your opponent if needed.

Tormented Soul
Very good in aggressive decks. The only thing I dislike is his one toughness, which is very important in this set, since there’s so many things that can affect that single point of life that the creature has.

Vampire Nocturnus
I would always play it if I play heavy black but else i’d leave it out for a few reasons, if you don’t play heavy black you might not get the bonus and you always have to reveal the top card of your library which is information that your opponent can make use of freely.

Veilborn Ghoul
This is better than I thought, it’s basically target opponent sacrifices a creatrure. and if you have exalted, he or she will have to have more power.

Vampire Nighthawk
One of the most solid creatures in the format. It’s one of the best defensive card in the set while still being very useful offensively. It has evasion, it can kill any creature and wins in a race situation, what else is there to add.

Vile Rebirth
Good combat trick, can remove cards like Veilborn Ghoul or creatures that are targetted in the graveyard.

Wit’s End
This has Wit just like Battle of Wits, both dearly unplayable.

Xathrid Gorgon
It a very good ground blocker and slowly transforms your opponents creatures into walls. Combined with either evasion creature or alternative win conditions, this becomes a great support card. Worse case scenario, this becomes a 3 powered attacker.

Zombie Goliath
Usually you have better 5 drops instead of this, but if you have no finisher, you could reluctantly insert this in your deck