If you’ve been playing magic for any sizeable amount of time, you likely quit for a few months or a year. Or, in my case, a decade. You return to the game grasping at what constructed deck you can play/afford while playing drafts to build your card collection back up.

Coming back into the game right before Avacyn Restored hit the stores, I had a plan:

1) Draft to build up a card base

3) trade those cards to get the cards I needed for whatever deck I was building.

Solid plan, right?  I thought so.  I was dead wrong though.  Well maybe not dead wrong but there was a much more economically sensible way of getting myself a deck worth playing in constructed tournaments.

So let’s talk about my flaws in practice and what I could have done to minimize my financial output while getting more for my dollar.

That’s a LOT of boosters !

The idea here is to pick a set (preferably the one you need cards from) and do what all card gamers love to do:  open product.  I remember back when I could only afford a few packs every couple of weeks.  If one of my friends got packs we were all there to watch as he would open them. Every card was important.  Not a single …single went unnoticed.  This was because most of the time we had no idea what the rare was until we looked them up (this was pre-Urza’s Block when they introduced the black/silver/gold set rarity indicator).

And sometimes packs didn’t even have rares!  They had levels of common + uncommon , so you got uncommon 1’s sometimes instead of a rare.  That was disappointing.  But I digress, If you want to build a deck, cracking packs is a poor way to go about it.  Mathematically speaking, it’s the worst way.  Let’s say you want a Snapcaster Mage (let’s not mention you actually want 4 of them) and you proceed to buy boosters of Innistrad.  The set has 50+ Rares.  That’s $200 ($4×50) in order to obtain the one card you needed versus spending the $25 to get  it as a single card. Sure its not as glamorous, but you just saved $175.   That’s somewhat extreme, but you get the point.

Now the argument with cracking packs is that you could trade off the stuff you don’t need and get the cards you do, buuuuuut….

When I last played Magic, I could tell you the price of any card without using a price guide (which in those days were primarily magazines). Dealing with the cards on a constant basis and having a dialogue with other players in different formats for the last 3 years as well as playing competitively gave me at edge in trading. No, not the edge you’re thinking of (I traded fairly, anyone trading in the same places all the time benefits from having that reputation). I just knew the prices.  Trading sessions happened faster and you knew what you wanted, who wanted what and that meant you could faster cycle through collections for cards that you either were looking for or that you could trade off.

Ten years in solitary later, I’m like one of those guys you hear about from WWII that they find on an island unaware that the war was over.  I’m like Donny in the Big Lebowski… I have no frame of reference.  So trading is embarrassingly slow for me. I don’t have the social Magic skills I did when I was 20.  Trading like I did then just isn’t as fluid.  I suspect the same thing could happen to you.

Sooooo,  purchasing bulk packs with this intention in mind was not only wasteful money-wise. It wastes time you could have spent playing and practicing with your new deck.

At the time I needed that skill, I didn’t have the income to pull off the next move.  What that did mean was that deck building took up to a few months.  I’d often work on several decks at a time so I could switch decks between tournaments.

So after purchasing a few boxes of Avacyn only to realize that trading isn’t my thing so much, I decided I need a better idea of what kind of deck I’d want to build.  Something cheap and competitive against the best deck in the field (Delver) and that could play well against the other decks.  That’s a tall order right?

The next big prerequisite for mystery deck was this:  Soon (end of October) M12 and Scars of Mirrodin Block will cycle out.  I want to get the most mileage for my money and be able to play these cards when Return to Ravnica becomes Standard legal.

Delver doesn’t look so hot once we loose all the nutty “free” spells and cantrips (not to mention Ponder).  Naya looks cool but contains a lot of rares and it seems a bit too complex for me to just get right back into the game.

Zombies is what caught my eye.  The deck is resilient, fun to play, it practically hates Delver and it’s less rare intensive.  Gravecrawler and Geralf’s Messenger are around $7 each.  A lot of the deck is filled with Commons and Uncommons.  Once we rotate out to RTR we loose Cemetery Reaper and a couple utilitiy cards, but I’m willing to bet we can find suitable replacements by that time.

So I bought a couple of the Black Avacyn Restored Event Decks: DEATH’S ENCROACH.

For your $20, you get one Gravecrawler and a Geralf’s Messenger plus a ton of other Zombie goodies.  Now if you spend another $42 on singles you’ll have a set of your Zombie rares.

This is a solid start to a playable Zombie Deck. For $62 that’s a lot of work you have taken care of.

I choose to use blue as a secondary color for : 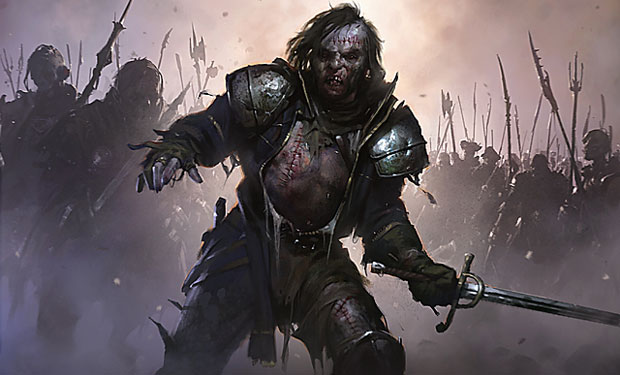 The deathtouch comes in handy but the secondary ability makes this card under-costed, not to mention he makes your horde bigger. Two of these in play is too much for most decks to handle.

This guy is great since it makes your opponent do three things:

1)Panic because he has to do math

2) Waste his removal suite on a zero power creature

and it combos well with:

there’s nothing better than getting your opponent to 5 and then sacrificing your board to get that extra damage in.  I’ve done it so many times and it’s never going to get old watching my opponent declare… “REALLY!?” as he scoops up his cards for game 2.

You can’t skip the mana fixing in this deck.  The Geralf’s Messenger are too black intensive to support islands and you can’t cast blue spells without blue mana.

This deck has a few cards that shut it down and you need to save those leaks for real threats. NOT because Johnny Red-Deck just Pillar of Flames your zombie, because you can be damn sure a Bonfire is just around the corner.

Same goes for Curse of Death’s Hold and Witchbane Orb.  You wait til the game switches tempo or you at least have a second Mana Leak in hand to use it… Unless you need it to win, you chill.  That said Mana Leak is great in this deck because most B/U Zombies don’t run it and that could result in your opponent playing blindly into it.

With 10 one drops the hope is to be making moves by turn two.  Spitter’s not a Zombie but he acts like removal so he’s an honorary zombie in my book.

One toughness creatures are the meat and potatoes of Standard right now and this card kills them. You have plenty of ways of offing your own guys and killing something bigger too.

You do need one Island. It’s not ideal to draw it and there are better lands to have but this is what we are working with here.

Hence the Island. Now you have 10 Blue “sources” without messing too much with the heavy black costs of a lot of your cards.

Because Lake of the Dead isn’t legal in Standard anymore.

It’s an alternate win condition in a stalemate. Just be careful when you play against Delver and Reaninamator-style decks.

Why not Phantasmal Image ? 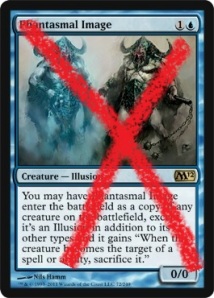 The Metamorph can target artifacts, which is nice against Birthing Pod.  This card is the one in the deck that kills Geist of Saint Traft (Legend Rule anyone).  It’s a Geralf’s Messenger, an extra Blood Artist… oh and it kills Elesh Norn, which is night night for this deck.

On a final deck building note:  Yes, I know Cavern of Souls is $30. 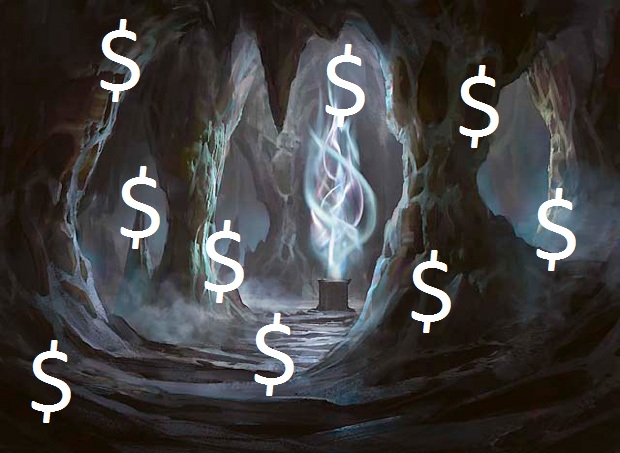 I don’t use them. does my deck suffer from it?  Maybe a little.  Would my lifestyle and wallet suffer more? YES.  So I left it out.  There are times when you need to stop and think:  “Is what I’m going to spend worth what I’m going to gain?”  $120 vs. a better chance to win (in the tournaments I’m playing) 8 packs?  Again, do the math.  We used to worry about countermagic before Cavern of Souls, so just play like you’re still worried.

If you’re willing to make the cuts at critical points and you don’t mind playing a deck that isn’t winning every Grand Prix, you can definitely build a deck that can win an FNM or similar event.  There are plenty of other decks out there that will surprise your opponent without surprising your landlord.

2 thoughts on “So You’re Planning on Returning to Magic: the Gathering?”