Are you tired of going to your local game store and always seeing the same Blue/White deck or Blue/Black control deck at a Standard (Type 2) tournament ?

A lot of stores and players are getting rather lazy with deckbuilding these days. I mentioned stores here, because they are usually the first point of contact for new players looking to play the game more seriously and invest more of their hard earned cash. Usually, the store clerk will recommend a popular archetype: UW Spirits, UW control, UWB control, UB control, Mono Black Zombies, UB Zombies, RG ramp, UW humans, Monowhite Humans, RG Aggro or Tempered Steel.

Now it may see that there is some variety here, but don’t be fooled for one second. First you’ll notice the abundance of the color blue, especially paired with white. It is by no coincidence that the blue/white duals in both Scars of Mirrodin and M12 are the most expensive followed by the blue and black duals. The demand for these is mind-boggling. Not a day goes by at my local shop where someone doesn’t ask me if I have one of these for trade.

This is both frustrating as a player and a trader because it kills diversity. We can easily conclude that diversity in gameplay is down because almost everyone is playing the same one or two decks. However, this also works for trading. If everyone is out for the same cards, how will trading for them work out? Not particularly well I’m afraid. New deck ideas need to be pumped out. A lot of players need to start becoming more deckbuilder-oriented instead of just net-decking what won last week’s tournament. Now I know this is a little harsh, but it needs to be said. The game now is becoming more and more about just grabbing a a decklist (more commonly referred to as a list) and assembling it with   little to no playtesting a few days prior to a Magic: the Gathering event.  This rather lazy approach was rather scrutinized a few years back, however now it is more or less becoming the norm. I will not deny that I have never done this when I am lacking time to assemble my own concoction.

The truth is: people have jobs, other hobbies, families,etc.

In that respect, it is OK for them to simply spend less time building a deck in order to maximize their playtime. It’s totally understandable and in fact, a bunch of Magic websites are oriented towards them. There are however still a lot of brewers out there who enjoy the prideful feeling you get when you win with your own home-brewed concoction.

It is for these ‘rogues’ that I provide the following list. While it may seem rather underpowered, it does take down a lot of the format’s top control or agro decks. As a side note, you will notice that they are currently rather inexpensive to build if you’ve been surveying prices for Standard decklist.

4 x Koth of the Hammer

3 x Koth of the Hammer

1 x Bonfire of the Damned

I think most people will have to look up a great deal of these cards. The would be considered somewhat ‘janky’ or unplayable.  I guess this means I will have to explain the card choices. Here we go!

You have your 16 basic mountains. They can be Zendikar textless if your budget permits, LOL. Not much to say here except that you should never be short on mountains and they are needed due to all of Koth’s abilities.

Next up, we have 3 Phyrexia’s Core. A lot of my opponents have to read this card before saying : “Wow! That’s pretty good!” Indeed it is. It not only provides you a small amount of lifegain, but also allows you to double up on all your wellspring effects. In addition, it ca do other nifty tricks like sacrifice Wurmcoil Engines when your opponent drops a Phantasmal Image or Phyrexian Metamorph to clone them (note: you have to sac the Engine before the clone creature enters play. Ie: when it’s on the stack) Post-sideboard it also turns your Perilous Myrs into Shocks when your opponent isn’t willing to make badtrades.

Inkmoth Nexus may seem weird here, but I assure you it is a warranted inclusion. It is a great alternate win condition against slower decks and decks that cannot deal with flying creatures. Also, if your opponent gains to much life and you are unable to race, you may be able to win with these little guys. Another noteworthy use is if you have a Kuldotha Phoenix in your graveyard, you can transform a nexus if you didn’t already have Metalcraft in order to put the Phoenix back into play.

No surprise to see a monored deck running 4 Koths. The actual surprise here is the amount of times you will play Koth and opt for the -2 ability right away. This will oftentimes allow you to play the mighty planeswalker plus a creature to protect him or just a massive Devil’s Play to finish your opponent.  Say you have 10 mountains, a regular Devil’s Play would only do 9 points of damange. With Koth of the Hammer, this becomes 10-4 to play Koth = 6 +10 generated by Koth = 16 damage! Quite the difference there!

Chandra, the Firebrand as a one of is rather nice mostly due to the fact that she can keep shutting down weenie strategies by pinging their little guys.  Her ultimate is so-so, but her second ability much like Koth’s is where I think she truly shines. She can copy your burn spells at -2. This is more versatile than you think. One of the rarer uses is when you think your opponent is holding a counterspell. You can use Chandra to copy say a Galvanic Blast for 4 in order to get a final 4 points of damage through to finish your opponent. This literally creates a +1 card advantage as it would be like you drew another Galvanic Blast.

The second and more common use would be with Slagstorm or Whipflare. In situations where your opponent’s creatures are too big to hand with any of these board clearing spells, you can double the damage and kill off opposing titans and the like. The final use is rather nice: she can copy a Kuldotha Rebirth without having to sacrifice a second artifact. Pretty cool , eh?

Karn rounds out the planeswalker roster. He is here mostly due to problematic permanents that a monored deck has a really tough time handling. Phyrexian Obliterator, Consecrated Sphinx, creatures with protection, equipment,etc are all rather problematic for this deck. As a side note, he is one of the first cards to get the boot while sidedecking against an agro strategy. Also, if you do get to use his ultimate it is most likely your opponent will concede.

The singleton Faithless Looting is a remnant from when the deck ran 4 Kuldotha Phoenix maindeck and allowed you to dump 1-2 phoenixes or Devil’s Play in order to use them later on in the game. With the rise of agro strategies, this number has been reduced to 1. I was at a loss for what to cut for this as it does its job extremely well even as a one-of.

The 8 wellsprings along with the Phyrexia’s Core are the little engine of the deck. You draw cards, fetch basic lands and sac your wellsprings to gain random life and do it all over again. Fun stuff! Also works extremely well with Faithless Looting if you wanted to sac Mycosynth Wellspring to get a land and then ‘loot’ to see more cards and most likely ditch the lad for a real card. These should be played early on as your control opponents are unlikely to counter them and they provide you with more and more cards. Kind of like a red Think Twice. 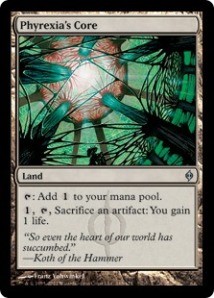 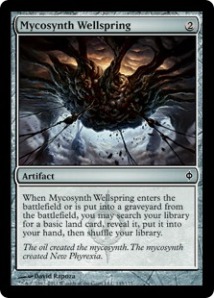 Kuldotha Rebirth here is a nice card since it either A) buys you a lot of time vs. aggro decks or B) allows you to be the aggro. Early on vs. late game control strategies. Also, it is another sac outlet to your wellsprings when you do not have a Phyrexia’s Core out. You can if need be sacrifice an Inkmoth Nexus to it if you are in dire need of creatures.

Finally a Batterskull , because it’s just really good. A lot of times it provides you with just enough life to survive the mid-game ad win. It is also a recursive threat versus a lot of control decks as you can simply return it to your hand and play it again when need be.

While this deck has an almost all-time low number of creatures, they are extremely worthwile.

Firstly, the Solemn Simulacrums do everything that this deck needs. They accelerate you to the 5 mana mark, they chump block perfectly, they usually draw you a card and on super rare occasions: they even attack!

The 2 Kuldotha Phoenixes are there because they always come back. It’s a great turn 5 play vs. control opponents due to the fact that if it gets countered, it can come back later one. The fact that it has haste is very relevant in this format due to the shortage of creatures that have haste, much less flying.

Inferno Titan was suggested by a friend of mine and I want to kick myself for not having run it in the first place. I do believe however, that it’s somewhat a drawback at times as it gets cloned wayyyyy too often.

Wurmcoil Engine is like the end boss. Usually ends games or allows me to survive for wayyy longer than I should. Much like titan, I cannot run more than 1 due to fear of having it cloned. It’s also probably the worst thing to have copied, as your opponent then also gets the little Deathtouch and Lifelink babies as well when it dies.

As far as this goes, here’s a brief run-down:

Awesome vs. Aggro. Usually 2 for 1’s a lot of Zombies as well. However its one random drawback: If you block a Strangleroot Geist, it will not be able to hits the now Undying 3/2 geist for 2 because your effects as the non-active player resolve first and his Geist will not be in play yet. Also works wonderfully against creatures with protection or equipped with swords.

These are there for the obvious equipment that is rather back breaking in type 2 right now. I also side them in Vs. RG Wolfrun decks to kill their Sphere of Suns and completely slow down their mana ramping.

Always get sided in vs. the slower control strategies, especially the ones that sometimes mill you.

These are great for slowing down the super agro strategies, especially the UW spirit deck. Blasphemous Acts come in when you need to kill stuff like Titans or if you feel you can play it early enough against something that swarms you a lot early like Tempered Steel. Definetly take you’re the Whipflares in that match-up.

Another awesome blocker that is also good against the few intimidate creatures. He can eat an Oblivion Ring for one of your more prized permanents. Also, don’t forget that he can force your opponent to target it via Kessig Wolf Run but not with equips.

It’s soooo good that it needs to be here twice. No but seriously, this card is worth investing in. I could play another Wurmcoil Engine here, but this card strikes me as being less vulnerable. It’s self-bouncing ability is sooo good. Sometimes, I even -2 Koth to play this so that I can leave 3 mana open to return it to my hand if need be.

This concludes my first awesome article about Magic: the Gathering and the like if you have any questions or comments, please do not hesitate to e-mail me at: carteblanchehobbies AT yahoo DOT com .